Finding the Truth in the Courtroom: Dealing with Deception, Lies, and Memories (Hardcover) 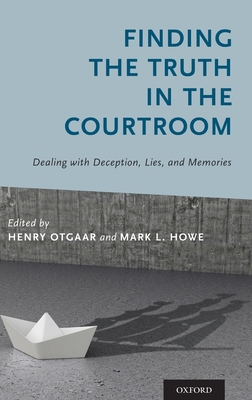 Finding the Truth in the Courtroom: Dealing with Deception, Lies, and Memories (Hardcover)


Not On Our Shelves—Ships in 1-5 Days
In many criminal trials, forensic technical evidence is lacking and triers of fact must rely on the reliability of eyewitness statements, identifications, and testimony; however, such reports can be riddled with deceptive statements or erroneous recollections. Based on such considerations, the
question arises as to how one should weigh such eyewitness accounts given the theoretical and empirical knowledge in this field. Finding the Truth in the Courtroom focuses on how legal professionals, legal/forensic psychologists, and memory researchers can decide when statements or identifications
are based on truthful or fabricated experiences and whether one can distinguish between lies, deception, and false memories. The contributors, key experts in the field, assemble recent experimental work and case studies in which deception or false memory plays a dominant role. Topics discussed relate to the susceptibility to suggestive pressure (e.g., Under which circumstances are children or adults the most vulnerable
to suggestion?), the fabrication of symptoms (e.g., How to detect whether PTSD symptoms are malingered?), and the detection of deceit (e.g., Which paradigms are promising in deception detection?), among others. By using this approach, this volume unites diverse streams of research (i.e.,
deception, malingering, false memory) that are involved in the reliability of eyewitness statements.