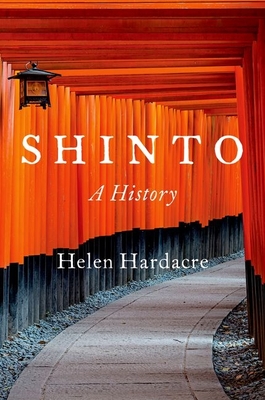 
Not On Our Shelves—Ships in 1-5 Days
Distinguished scholar of Japanese religions and culture Helen Hardacre offers the first comprehensive history of Shinto, the ancient and vibrant tradition whose colorful rituals are still practiced today. Under the ideal of Shinto, a divinely descended emperor governs through rituals offered to deities called Kami. These rituals are practiced in innumerable shrines across the realm, so that local rites mirror the monarch's ceremonies. Through this theatre of state, it is thought, the human, natural, and supernatural worlds will align in harmony and prosper. Often called "the indigenous religion of Japan," Shinto's institutions, rituals, and symbols are omnipresent throughout the island nation. But, perhaps surprisingly, both its religiosity and its Japanese origins have been questioned. Hardacre investigates the claims about Shinto as the embodiment of indigenous tradition, and about its rightful place in the public realm. Shinto has often been represented in the West as the engine that drove Japanese military aggression. To this day, it is considered provocative for members of the government to visit the Yasukuni Shrine in Tokyo, which honors the Japanese war dead, and this features as a source of strain in Japan's relations with China and Korea. The Yasukuni Shrine is a debated issue in Japanese national politics and foreign relations and reliably attracts intensive media coverage. Hardacre contends, controversially, that it was the Allied Occupation that created this stereotype of Shinto as the religion of war, when in fact virtually
all branches of Japanese religions were cheerleaders for the war and imperialism. The history and nature of Shinto are subjects of vital importance for understanding contemporary Japan, its politics, its international relations, and its society. Hardacre's magisterial work will stand as the definitive reference for years to come.

Helen Hardacre is Reischauer Institute Professor of Japanese Religions and Society at Harvard University. Concentrating on Japanese religious history of the modern period, she has done extended field study of contemporary Shinto and Buddhist religious organizations, the religious life of Japan's Korean minority, and contemporary ritualization of abortion. She has also researched State Shinto and directs a research project on constitutional revision in Japan.