Holocaust, Genocide, and the Law: A Quest for Justice in a Post-Holocaust World (Paperback) 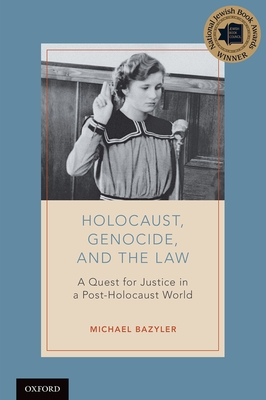 Holocaust, Genocide, and the Law: A Quest for Justice in a Post-Holocaust World (Paperback)


Not On Our Shelves—Ships in 1-5 Days
(This book cannot be returned.)
A great deal of contemporary law has a direct connection to the Holocaust. That connection, however, is seldom acknowledged in legal texts and has never been the subject of a full-length scholarly work. This book examines the background of the Holocaust and genocide through the prism of the
law; the criminal and civil prosecution of the Nazis and their collaborators for Holocaust-era crimes; and contemporary attempts to criminally prosecute perpetrators for the crime of genocide. It provides the history of the Holocaust as a legal event, and sets out how genocide has become known as
the crime of crimes under both international law and in popular discourse. It goes on to discuss specific post-Holocaust legal topics, and examines the Holocaust as a catalyst for post-Holocaust international justice. Together, this collection of subjects establishes a new legal discipline, which
the author Michael Bazyler labels Post-Holocaust Law.

Michael Bazyler is Professor of Law and The 1939 Society Scholar in Holocaust and Human Rights Studies at the Fowler School of Law, Chapman University. He is the author of Holocaust Justice: The Battle for Restitution in America's Courts (2003), Holocaust Restitution: Perspective on the Litigationand its Legacy (co-authored with Roger Alford, 2006), Forgotten Trials of the Holocaust (co-authored with Frank Tuerkheimer, 2014), and numerous articles on international human rights law. He has testified before Congress and his writings have been cited by the United States Supreme Court.