Teaching Moral Sex: A History of Religion and Sex Education in the United States (Hardcover) 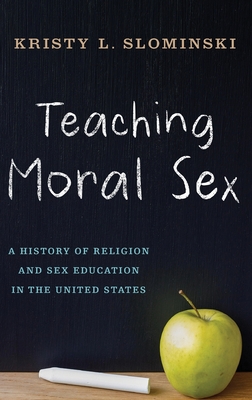 Teaching Moral Sex: A History of Religion and Sex Education in the United States (Hardcover)


Not On Our Shelves—Ships in 1-5 Days
Whose job is it to teach the public about sex? Parents? The churches? The schools? And what should they be taught? These questions have sparked some of the most heated political debates in recent American history, most recently the battle between proponents of comprehensive sex education and those in favor of an "abstinence-only" curriculum. Kristy Slominski shows that these questions have a long, complex, and surprising history. Teaching Moral Sex is the first comprehensive study of the role of religion in the history of public sex education in the United States. The field of sex education, Slominski shows, was created through a collaboration between religious sex educators-primarily liberal Protestants, along with some Catholics and Reform Jews-and "men of science"-namely physicians, biology professors, and social scientists. She argues that the work of early religious sex educators laid the foundation for both sides of contemporary controversies that are now often treated as disputes between "religious" and "secular" Americans. Slominski examines the religious contributions to national sex education organizations from the late nineteenth century to the early twenty-first. Far from being a barrier to sex education, she demonstrates, religion has been deeply embedded in the history of sex education, and its legacy has shaped the terms of current debates. Focusing on religion uncovers an under-recognized cast of characters-including Quaker and Unitarian social purity reformers, military chaplains, and the Young Men's Christian Association- who, Slominski deftly shows, worked to make sex education more acceptable to the public through a strategic combination of progressive and restrictive approaches to sexuality. Teaching Moral Sex highlights the essential contributions of religious actors to the movement for sex education in the United States and reveals where their influence can still be felt today.