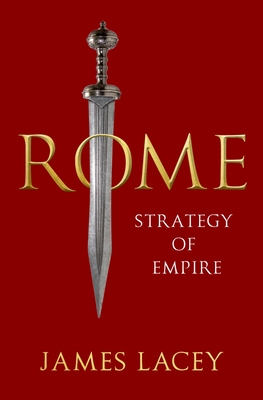 
In Stock—Click for Locations
The first work to lay out Roman strategic thinking from its start under Augustus until its final demise in 476 CE From Octavian's victory at Actium (31 bc) to its traditional endpoint in the West (476), the Roman Empire lasted a solid 500 years--an impressive number by any standard, and fully one-fifth of all recorded history. In fact, the decline and final collapse of the Roman Empire took longer than most
other empires even existed. Any historian trying to unearth the grand strategy of the Roman Empire must, therefore, always remain cognizant of the time scale, in which she is dealing. Although the pace of change in the Roman era never approached that of the modern era, it was not an empire in
stasis. While the visible trappings may have changed little, the challenges Rome faced at its end were vastly different than those faced by Augustus and the Julio-Claudians. Over the centuries, the Empire's underlying economy, political arrangements, military affairs, and, most importantly, the
myriad of external threats it faced were in constant flux, making adaptability to changing circumstances as important to Roman strategists as it is to strategists of the modern era. Yet the very idea of Rome having a grand strategy, or what it might be, had not concerned historians until Edward Luttwak's The Grand Strategy of the Roman Empire appeared forty years ago. Although this pioneering work generated much debate, it failed to win over many ancient historians, in part
because of its heavy emphasis on military force and its neglect of considerations of diplomacy, economics, politics, culture, and the changing nature of the threats that confronted Rome. By employing an expansive definition of strategy and by focusing much of the narrative on crucial historical moments and the personalities involved, James Lacey provides a comprehensive, persuasive, and engaging account of the rise and fall of the Roman Empire. It assimilates the most recent work of
classical historians and archaeologists to correct the flaws and omissions of previous accounts, thus presenting the most complete and nuanced narrative of Roman strategic thinking and execution ever published.

James Lacey is Course Director and Professor of Strategic Studies and Political Economy at Marine Corps War College. His previous books include, as author, The Washington War: FDR's Inner Circle and the Politics of Power That Won World War II and The First Clash: The Miraculous Greek Victory atMarathon and Its Impact on Western Civilization; as co-author with Williamson Murray, Gods of War: History's Greatest Military Rivals and Moment of Battle: The Twenty Clashes That Changed the World; and, as editor, Great Strategic Rivalries: From The Classical World to the Cold War.