Fidelity & Constraint: How the Supreme Court Has Read the American Constitution (Hardcover) 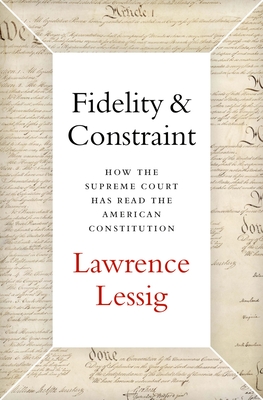 Fidelity & Constraint: How the Supreme Court Has Read the American Constitution (Hardcover)


Not On Our Shelves—Ships in 1-5 Days
The fundamental fact about our Constitution is that it is old -- the oldest written constitution in the world. The fundamental challenge for interpreters of the Constitution is how to read that old document over time. In Fidelity & Constraint, legal scholar Lawrence Lessig explains that one of the most basic approaches to interpreting the constitution is the process of translation. Indeed, some of the most significant shifts in constitutional doctrine are products of the evolution of the translation process over
time. In every new era, judges understand their translations as instances of interpretive fidelity, framed within each new temporal context. Yet, as Lessig also argues, there is a repeatedly occurring countermove that upends the process of translation. Throughout American history, there has been a second fidelity in addition to interpretive fidelity: what Lessig calls fidelity to role. In each of the cycles of translation that he
describes, the role of the judge -- the ultimate translator -- has evolved too. Old ways of interpreting the text now become illegitimate because they do not match up with the judge's perceived role. And when that conflict occurs, the practice of judges within our tradition has been to follow the
guidance of a fidelity to role. Ultimately, Lessig not only shows us how important the concept of translation is to constitutional interpretation, but also exposes the institutional limits on this practice. The first work of both constitutional and foundational theory by one of America's leading legal minds, Fidelity & Constraint maps strategies that both help judges understand the fundamental conflict at the heart of interpretation whenever it arises and work around the limits it inevitably creates.

Lawrence Lessig is Roy L. Furman Professor of Law and Leadership at Harvard Law School. He is the author of many books, including Code 2.0, Free Culture, Remix, and Republic, Lost, and most recently, America, Compromised.