Jacquard's Web: How a Hand-Loom Led to the Birth of the Information Age (Paperback) 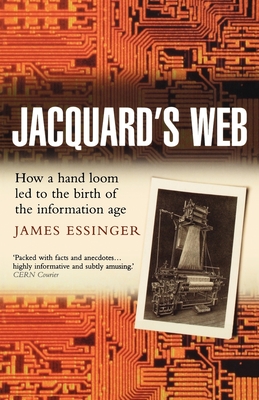 Jacquard's Web: How a Hand-Loom Led to the Birth of the Information Age (Paperback)


Not On Our Shelves—Ships in 1-5 Days
(This book cannot be returned.)
Circuits from silk? Today's technophiles probably have no idea how much today's computer technology owes to the invention of one ingenuous textile manufacturer in nineteenth-century France. Here, master storyteller James Essinger shows through a series of remarkable and meticulously researched historical connections how the Jacquard loom kick-started a process of scientific evolution which would lead directly to the development of the modern computer.
Jacquard's 1804 invention, a loom which used punch cards with stored instructions for weaving different patterns and designs, enabled the master silk-weavers of Lyons to weave fabrics 25 times faster than the competition. Here, Essinger reveals the plethora of extraordinary links between that innovation in weaving and today's computer age, introducing us to the intriguing and colorful people who paved the way. The book concludes by bringing the story completely up-to-date with the latest developments in the World Wide Web and the fascinating phenomenon of artificial intelligence.
Attractively illustrated and compellingly narrated, Jacquard's Web presents an eye-opening and scarcely known history that will prove fascinating to readers of popular science, especially those interested in the history of science, technology, and computing, as well as professional scientists, historians, and students.

James Essinger is a writer with a particular interest in the history of ideas that have had a practical impact on the modern world. He is currently working on a novel about Charles Babbage and Ada Lovelace and on a popular history of the written word.