Jains in the World: Religious Values and Ideology in India (Hardcover) 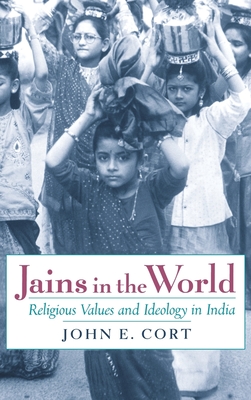 Jains in the World: Religious Values and Ideology in India (Hardcover)


Not On Our Shelves—Ships in 1-5 Days
(This book cannot be returned.)
There is no doubt that the wealth of new data and ideas offered in this exquisite book provides the deepest insights yet into the contemporary religious world of Jain laity. It will serve for some time as a paradigmatic monograph for future empirical studies of Jain religious life. --Bulletin of the School of Oriental and African Studies Jains in the World is a significant and welcome ethnography of contemporary Jains in western India by the most prominent scholar of Jainism in North America. This book is a must for scholars of South Asian religions and will provide scholars of Hindu traditions fine grounding both in a central dialectic of Jain thought and in contemporary Jain praxis. --International Journal of Hindu Studies A valuable addition to the literature on Jainism as a living faith. Since it has the additional merits of being clearly written, attractively illustrated, and free of unnecessary theoretical baggage, it should serve as a good introduction to this tradition for college students. --Journal of the American Oriental Society A must-read for understanding, by and large, the ritual world of the Jains. He has succeeded in proving that the concept of well-being is as central to the Jains' moral universe as their more entrenched pursuit of the goal of liberation of soul from karmic bondage.--History of Religions An essential read for students and scholars of Jainism. . . . it identifies and defines a realm of value in Jainism strongly alluded to by recent scholarship, but which, until now, had not been explicitly stated. For this reason Jains in the World will doubtless prove to be a fundamental turning point in the development of Jaina studies.-- The Journal of Religion This book presents a detailed fieldwork-based study of the ancient Indian religion of Jainism. Drawing on field research in northern Gujarat and on the study of both ancient Sanskrit and Prakrit and modern vernacular Jain religious literature, John Cort provides a rounded portrait of the religion as it is practiced today.

Professor and Director of the Department of Religion at Denison University. Author of Framing the Jina (November 2009; 218 copies)