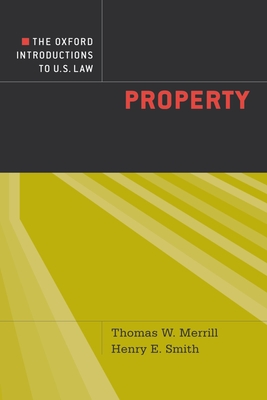 
Not On Our Shelves—Ships in 1-5 Days
(This book cannot be returned.)
The Oxford Introductions to U.S. Law: Property provides both a bird's eye overview of property law and an introduction to how property law affects larger concerns with individual autonomy, personhood, and economic organization. Written by two authorities on property law, this book gives
students of property a coherent account of how property law works, with an emphasis on describing the central issues and policy debates. It is designed for law students who want a short and theoretically integrated treatment of the subject, as well as for lawyers who are interested in the conceptual
foundations of the law of property.

Thomas W. Merrill is a professor of law at Columbia Law School, where he teaches in the areas of property, environmental law, natural resources, administrative law, and legislation. After graduating from Grinnell College and Oxford University, he received his J.D. from the University of Chicago, andthen clerked for the Hon. David Bazelon, U.S. Court of Appeals for the D.C. Circuit, and the Hon. Harry Blackmun, U.S. Supreme Court. From 1987-1990 he served as Deputy Solicitor General, U.S. Department of Justice. He began his academic career at the Northwestern University School of Law and hasalso taught at the Yale Law School. His publications include Property: Principles and Policies (with Henry E. Smith, Foundation 2007), and Property: Takings (with David Dana, Foundation 2002). He is, in addition, the author of more than 75 academic articles on property, environmental law, administrative law, constitutional law, and the Supreme Court. Henry E. Smith is Fessenden Professor of Law at Harvard Law School, where he directs the Project on the Foundations of Private Law and teaches in the areas of property, intellectual property, natural resources, remedies, and taxation. After receiving an A.B. from Harvard, a Ph.D. in Linguistics fromStanford, and a J.D. from Yale, he clerked for the Hon. Ralph K. Winter, U.S. Court of Appeals for the Second Circuit, taught at the Northwestern University School of Law, and was the Fred A. Johnston Professor of Property and Environmental Law at Yale Law School. He has written primarily on the lawand economics of property and intellectual property. His publications include Property: Principles and Policies (with Thomas W. Merrill, Foundation 2007), The Privilege Against Self-Incrimination: Its Origins and Development (with R.H. Helmholz et al., Chicago 1997); Restrictiveness in Case Theory(Cambridge studies in linguistics no. 78, 1996). He is the co-editor of the Research Handbook on the Economics of Property Law (with Kenneth Ayotte, forthcoming 2009).