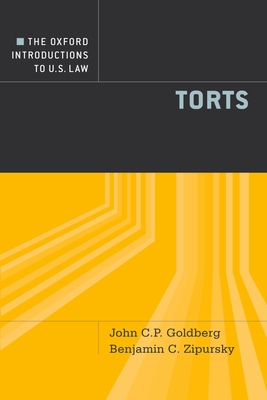 
Not On Our Shelves—Ships in 1-5 Days
(This book cannot be returned.)
Torts--personal injury law--is a fundamental yet controversial part of our legal system. The Oxford Introductions to U.S. Law: Torts provides a clear and comprehensive account of what tort law is, how it works, what it stands to accomplish, and why it is now much-disputed. Goldberg and
Zipursky--two of the world's most prominent tort scholars--carefully analyze leading judicial decisions and prominent tort-related legislation, and place each event into its proper context. Topics covered include products liability, negligence, medical malpractice, intentional torts, defamation and
privacy torts, punitive damages, and tort reform.

John C. P. Goldberg, a professor at Harvard Law School, is a co-author of Tort Law: Responsibilities and Redress (Aspen Press), a casebook now in its second edition. He has published more than 30 scholarly articles and essays on torts in leading law journals. He also serves on the editorial boardof Legal Theory and is co-Editor-in-Chief of the Journal of Tort Law. Prior to joining the Harvard faculty, he spent thirteen years as a member of the Vanderbilt University Law School faculty, where he served as Associate Dean for Research. At Vanderbilt, Goldberg received four teaching prizes, eachfor a different subject: Advanced Torts/Philosophy of Law, Torts, Contracts and Civil Procedure. Active in the American Law Institute's consultative group for the Third Restatement of Torts, he is this year the president of the Torts and Compensation Systems section of the Association of AmericanLaw Schools. After receiving an M.Phil. in Politics from Oxford University, and M.A. from Princeton University and a J.D. from New York University, Goldberg clerked for District Judge Jack Weinstein of the Eastern District of New York and for Supreme Court Justice Byron White. He practiced law inBoston before joining the Vanderbilt faculty. Benjamin C. Zipursky is James H. Quinn '49 Chair in Legal Ethics and Professor of Law at Fordham University School of Law, where he served as Associate Dean for Academic Affairs from 2001-03. He has taught as a Visiting Professor at Columbia Law School, Harvard Law School and Vanderbilt Law School, has lectured widely in the United States and abroad, and has been a frequent commentator in the news media on issues related to mass torts and pharmaceutical liability. Professor Zipursky is a leading scholar in torts, tort theory, legal ethics, and jurisprudence, and has published more than fortyarticles and book chapters on subjects ranging from punitive damages and duty in tort law to the varieties of pragmatism within legal philosophy. A co-author of the casebook Tort Law: Responsibilities and Redress (Aspen), now its second edition, Zipursky is a Senior Editor of the Journal of TortLaw and a member of the Editorial Board of Legal Theory. After receiving a Ph.D. in Philosophy from the University of Pittsburgh and a J.D. from New York University, he clerked for the Hon. Kimba M. Wood in the Southern District of New York and practiced products liability law at Arnold & Porterin New York City. Zipursky is best known as a pioneer of civil recourse theory of tort law, which he and Professor Goldberg have established as a leading alternative within tort theory to corrective justice theory and law and economics.