Framing the Jina: Narratives of Icons and Idols in Jain History (Hardcover) 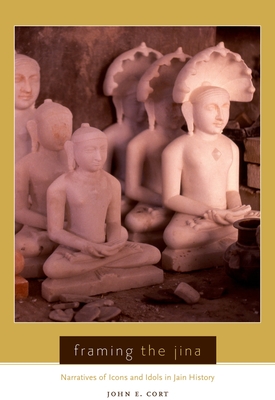 Framing the Jina: Narratives of Icons and Idols in Jain History (Hardcover)


Special Order—Subject to Availability
John Cort explores the narratives by which the Jains have explained the presence of icons of Jinas (their enlightened and liberated teachers) that are worshiped and venerated in the hundreds of thousands of Jain temples throughout India. Most of these narratives portray icons favorably, and so justify their existence; but there are also narratives originating among iconoclastic Jain communities that see the existence of temple icons as a sign of decay and corruption. The veneration of Jina icons is one of the most widespread of all Jain ritual practices. Nearly every Jain community in India has one or more elaborate temples, and as the Jains become a global community there are now dozens of temples in North America, Europe, Africa, and East Asia. The cult of temples and icons goes back at least two thousand years, and indeed the largest of the four main subdivisions of the Jains are called Murtipujakas, or Icon Worshipers. A careful reading of narratives ranging over the past
15 centuries, says Cort, reveals a level of anxiety and defensiveness concerning icons, although overt criticism of the icons only became explicit in the last 500 years. He provides detailed studies of the most important pro- and anti-icon narratives. Some are in the form of histories of the origins and spread of icons. Others take the form of cosmological descriptions, depicting a vast universe filled with eternal Jain icons. Finally, Cort looks at more psychological explanations of the presence of icons, in which icons are defended as necessary spiritual corollaries to the very fact of human embodiedness.