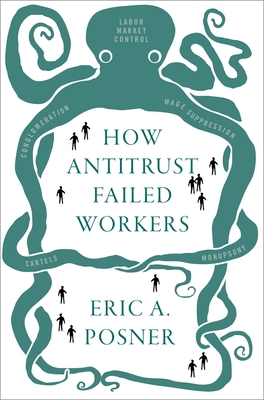 By Eric A. Posner


On Our Shelves Now at:
A trenchant account of an unacknowledged driver of inequality and wage stagnation in America: the failure of antitrust law to prevent the consolidation of employers, who use their market power to suppress wages. Since the 1970s, Americans have seen inequality skyrocket--and job opportunities stagnate. There are many theories of why this happened, including the decline of organized labor, changes in technology, and the introduction of tax policies that favored the rich. A missing piece of the puzzle is the consolidation of employers, which has resulted in limited competition in labor markets. This should have been addressed by antitrust law, but was not. In How Antitrust Law Failed Workers, Eric Posner documents the failure of antitrust law to address labor market concentration. Only through reforming antitrust law can we shield workers from employers' overwhelming market power. Antitrust law is well-known for its role in combatting mergers, price-fixing arrangements, and other anticompetitive actions in product markets. By opposing these practices, antitrust law enhances competition among firms and keeps prices low for goods and services. Less well-known, antitrust law also applies to anticompetitive conduct by employers in labor markets, which pushes wages below the competitive rate. Yet there have been few labor market cases or enforcement actions, and almost no scholarly commentary on the role of antitrust law in labor markets. This book fills the gap. It explains why antitrust law has failed to address labor market concentration, and how it can be reformed so that it does a better job. Essential reading for anyone interested in fighting economic inequality, How Antitrust Failed Workers also offers a sharp primer on the true nature of the American economyone that is increasingly uncompetitive and tilted against workers.

Eric A. Posner is Kirkland and Ellis Distinguished Service Professor of Law, University of Chicago. His most recent books are Radical Markets (with Glen Weyl), which was named a best book for 2018 by The Economist; and Last Resort: The Financial Crisis and the Future of Bailouts, which was named abest book for 2018 by The Financial Times. He is of counsel at MoloLamken LLP, a fellow of the American Academy of Arts and Sciences, and a member of the American Law Institute. He has written extensively for popular media outlets, including The New York Times, The Wall Street Journal, and TheWashington Post, and testified before Congress.