The Battle Over Patents: History and Politics of Innovation (Hardcover) 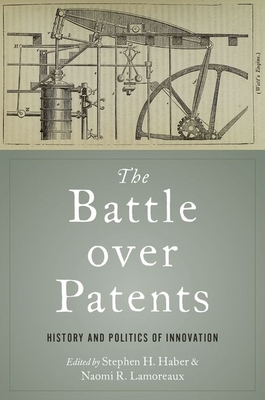 The Battle Over Patents: History and Politics of Innovation (Hardcover)

An examination of how the patent system works, imperfections and all, to incentivize innovation Do patents facilitate or frustrate innovation? Lawyers, economists, and politicians who have staked out strong positions in this debate often attempt to validate their claims by invoking the historical record--but they frequently get the history wrong. The Battle over Patents gets it right. Bringing together thoroughly researched essays from prominent historians and social scientists, this volume traces the long and contentious history of patents and examines how they have worked in practice. Editors Stephen H. Haber and Naomi R. Lamoreaux show
that patent systems are the result of contending interests at different points in production chains battling over economic surplus. The larger the potential surplus, the more extreme are the efforts of contending parties-now and in the past-to search out, generate, and exploit any and all sources of
friction. Patent systems, as human creations, are therefore necessarily ridden with imperfections. This volume explores these shortcomings and explains why, despite all the debate, historically US-style patent systems still dominate all other methods of encouraging inventive activity.

Stephen H. Haber is the A.A. and Jeanne Welch Milligan Professor of Humanities and Sciences and the Peter and Helen Bing Senior Fellow at the Hoover Institution at Stanford University. In addition, he is a professor of political science, professor of history, and professor of economics (bycourtesy), and asenior fellow of the Stanford Institute for Economic Policy Research. Naomi R. Lamoreaux is Stanley B. Resor Professor of Economics and History at Yale University and a Research Associate at the National Bureau of Economic Research. She is the author of The Great Merger Movement in American Business, 1895-1904 and Insider Lending: Banks, Personal Connections, andEconomic Development in Industrial New England, and published numerous articles on business, economic, and financial history.