What Happened to the Vital Center?: Presidentialism, Populist Revolt, and the Fracturing of America (Paperback) 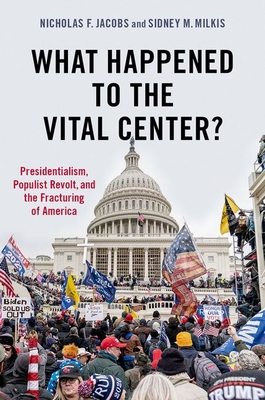 What Happened to the Vital Center?: Presidentialism, Populist Revolt, and the Fracturing of America (Paperback)


Not On Our Shelves—Ships in 1-5 Days
Taking the reader through a long view of American history, What Happened to the Vital Center? offers a novel and important contribution to the ongoing scholarly and popular discussion of how America fell apart and what might be done to end the Cold Civil War that fractures the country and weakens the national resolve. In What Happened to the Vital Center?, Nicholas Jacobs and Sidney Milkis tackle a foundational question within American political history: Is current partisan polarization, aggravated by populist disdain for constitutional principles and institutions, a novel development in American politics? Populism is not a new threat to the country's democratic experiment, but now insurgents intrude directly on elections and government. During previous periods of populist unrest, the US was governed by resilient parties that moderated extremist currents within the political system. This began to crumble during the 1960s, as anti-institutionalist incursions into the Democratic and Republican organizations gave rise to reforms that empowered activists at the expense of the median voter and shifted the controlling power over parties to the executive branch. Gradually, the moderating influence that parties played in structuring campaigns and the policy process eroded to the point where extreme
polarization dominated and decision-making power migrated to the presidency. Weakened parties were increasingly dominated by presidents and their partnerships with social activists, leading to a gridlocked system characterized by the politics of demonization and demagoguery. Executive-centered parties more easily ignore the sorts of moderating voices that had prevailed in an earlier era. While the Republican Party is more susceptible to the dangers of populism than the Democrats, both parties are animated by a presidency-led, movement-centered vision of democracy. After tracing this history, the authors dismiss calls to return to some bygone era. Rather, the final section highlights the ways in which the two parties can be revitalized as institutions of collective responsibility that can transform personal ambition and rancorous partisanship into principled conflict over the profound issues that now divide the country. The book will transform our understanding of how we ended up in our
current state of extreme polarization and what we can do to fix it.

Nicholas F. Jacobs is an Assistant Professor at Colby College, where he teaches in the Government Department. Sidney M. Milkis is the White Burkett Miller Professor in the Department of Politics and a Faculty Fellow at the Miller Center at the University of Virginia.