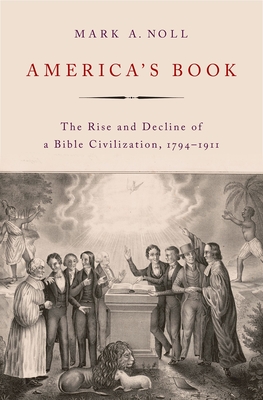 By Mark A. Noll


Not On Our Shelves—Ships in 1-5 Days
America's Book shows how the Bible decisively shaped American national history even as that history influenced the use of Scripture. It explores the rise of a strongly Protestant Bible civilization in the early United States that was then fractured by debates over slavery, contested by growing numbers of non-Protestant Americans (Catholics, Jews, agnostics), and torn apart by the Civil War. This first comprehensive history of the Bible in America explains why Tom Paine's anti-biblical tract The Age of Reason (1794) precipitated such dramatic effects, how innovations in printing by the American Bible Society created the nation's publishing industry, why Nat Turner's slave rebellion of 1831 and the bitter election of 1844 marked turning points in the nation's engagement with Scripture, and why Theodore Roosevelt and Woodrow Wilson were so eager to commemorate the 300th anniversary of the King James Version of the Bible. Noll's magisterial work highlights not only the centrality of the Bible for the nation's most influential religious figures (Methodist Francis Asbury, Richard Allen of the African Methodist Episcopal Church, Catholic Bishop Francis Kenrick, Jewish scholar Solomon Schechter, agnostic Robert Ingersoll), but also why it was important for presidents like Abraham Lincoln; notable American women like Harriet Beecher Stowe, Elizabeth Cady Stanton, and Frances Willard; dedicated campaigners for civil rights like Frederick Douglass and Francis Grimk ; lesser-known figures like Black authors Maria Stewart and Harriet Jacobs; and a host of others of high estate and low. The book also illustrates how the more religiously plural period from Reconstruction to the early twentieth century saw Scripture become a much more fragmented, though still significant, force in American culture, particularly as a source of hope and moral authority for Americans on both sides of the battle over white
supremacy-both for those hoping to fight it, and for others seeking to justify it.

Mark A. Noll is Professor of History Emeritus at the University of Notre Dame. His recent publications include In the Beginning Was the Word: The Bible in American Public Life, 1492-1783 (2016); America's God: From Jonathan Edwards to Abraham Lincoln (2002) and, as co-editor, Protestantism after 500 Years (2016).