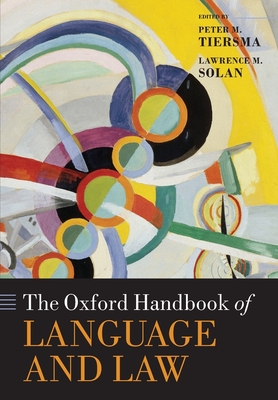 
Not On Our Shelves—Ships in 1-5 Days
(This book cannot be returned.)
This book provides a state-of-the-art account of past and current research in the interface between linguistics and law. It outlines the range of legal areas in which linguistics plays an increasing role and describes the tools and approaches used by linguists and lawyers in this vibrant new
field. Through a combination of overview chapters, case studies, and theoretical descriptions, the volume addresses areas such as the history and structure of legal language, its meaning and interpretation, multilingualism and language rights, courtroom discourse, forensic identification,
intellectual property and linguistics, and legal translation and interpretation. Encyclopaedic in scope, the handbook includes chapters written by experts from every contentint who are familiar with linguistic issues that arise in diverse legal systems, including both civil and common law jurisdictions, mixed systems like that of China, and the emerging law of the European
Union.

Peter M. Tiersma was the Hon. William Matthew Byrne Professor of Law at Loyola Law School of Los Angeles from 2009 until his death in 2014. He had a Ph.D in Linguistics from the University of California, San Diego, and a J. D. degree from the University of California, Berkeley. His books includeLegal Language (1999), and Parchment, Paper, Pixels: Law and the Technologies of Communication (2010). Lawrence M. Solan is the Don Forchelli Professor of Law and the Director of the Center for the Study of Law, Language, and Cognition at Brooklyn Law School. He is on the editorial board of The International Journal of Speech, Language, and the Law and the author of Language and Judges (1993).