The Coherence of Theism (Clarendon Library of Logic and Philosophy) (Paperback) 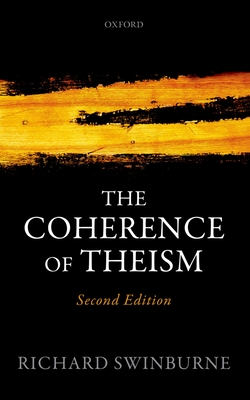 The Coherence of Theism (Clarendon Library of Logic and Philosophy) (Paperback)


Not On Our Shelves—Ships in 1-5 Days
The Coherence of Theism investigates what it means, and whether it is coherent, to say that there is a God. Richard Swinburne concludes that despite philosophical objections, most traditional claims about God are coherent (that is, do not involve contradictions); and although some of the most important claims are coherent only if the words by which they are expressed are being used in analogical senses, this is the way in which theologians have usually claimed that they are being used. When the first edition of this book was published in 1977, it was the first book in the new 'analytic' tradition of philosophy of religion to discuss these issues. Since that time there have been very many books and discussions devoted to them, and this new, substantially rewritten, second edition takes account of these discussions and of new developments in philosophy generally over the past 40 years. These discussions have concerned how to analyse the claim that God is 'omnipotent', whether God
can foreknow human free actions, whether God is everlasting or timeless, and what it is for God to be a 'necessary being'. On all these issues this new edition has new things to say.

Richard Swinburne, University of Oxford Richard Swinburne has taught at many universities in the UK and in various foreign countries, and continues to give lectures abroad frequently since his retirement. From 1972 to 1984 he was Professor of Philosophy at the University of Keele, after which he was Professor of Philosophy of Religion in the University of Oxford. He has written many books and papers on many areas of philosophy, especially philosophy of religion, and is a Fellow of the British Academy.