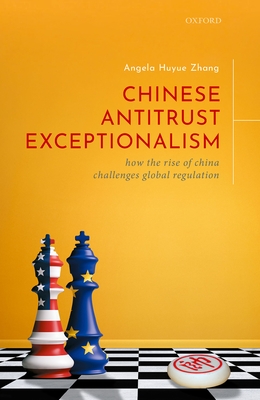 
Not On Our Shelves—Ships in 1-5 Days
A ProMarket Best Political Economy Book of the Year China's rise as an economic superpower has caused growing anxieties in the West. Europe is now applying stricter scrutiny over takeovers by Chinese state-owned giants, while the United States is imposing aggressive sanctions on leading Chinese technology firms such as Huawei, TikTok, and WeChat. Given the escalating geopolitical tensions between China and the West, are there any hopeful prospects for economic globalization? In her compelling new book Chinese Antitrust Exceptionalism, Angela Zhang examines the most important and least understood tactic that China can deploy to counter western sanctions: antitrust law. Zhang reveals how China has transformed antitrust law into a powerful economic weapon, supplying theory and case studies to explain its strategic application over the course of the Sino-US tech war. Zhang also exposes the vast administrative discretion possessed by the Chinese government, showing how agencies can leverage the media to push forward aggressive enforcement. She further dives into the bureaucratic politics that spurred China's antitrust regulation, providing an incisive analysis of how divergent missions, cultures, and structures of agencies have shaped regulatory outcomes. More than a legal analysis, Zhang offers a political and economic study of our contemporary moment. She demonstrates that Chinese exceptionalism-as manifested in the way China regulates and is regulated, is reshaping global regulation and that future cooperation relies on the West comprehending Chinese idiosyncrasies and China achieving greater transparency through integration with its Western rivals. Watch a short introductory video from the author: www.youtube.com/watch?v=vH3tFxWIP0Q