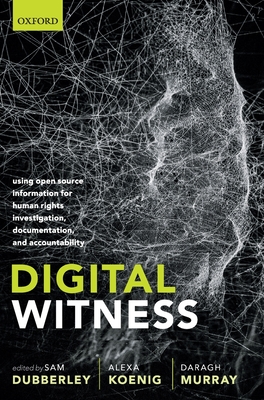 
Not On Our Shelves—Ships in 1-5 Days
From videos of rights violations, to satellite images of environmental degradation, to eyewitness accounts disseminated on social media, human rights practitioners have access to more data today than ever before. To say that mobile technologies, social media, and increased connectivity are
having a significant impact on human rights practice would be an understatement. Modern technology - and the enhanced access it provides to information about abuse - has the potential to revolutionise human rights reporting and documentation, as well as the pursuit of legal accountability. However, these new methods for information gathering and dissemination have also created significant challenges for investigators and researchers. For example, videos and photographs depicting alleged human rights violations or war crimes are often captured on the mobile phones of victims or
political sympathisers. The capture and dissemination of content often happens haphazardly, and for a variety of motivations, including raising awareness of the plight of those who have been most affected, or for advocacy purposes with the goal of mobilising international public opinion. For this
content to be of use to investigators it must be discovered, verified, and authenticated. Discovery, verification, and authentication have, therefore, become critical skills for human rights organisations and human rights lawyers. This book is the first to cover the history, ethics, methods, and best-practice associated with open source research. It is intended to equip the next generation of lawyers, journalists, sociologists, data scientists, other human rights activists, and researchers with the cutting-edge skills needed
to work in an increasingly digitized, and information-saturated environment.

Sam Dubberley, Research Consultant, Human Rights, Big Data and Technology Project, University of Essex and Special Advisor Crisis Response, Amnesty International, Alexa Koenig, Executive Director, Human Rights Center, UC Berkeley, Daragh Murray, Senior Lecturer, School of Law & Human Rights Centre, University of Essex Sam Dubberley is a research consultant with the Human Rights Big Data and Technology project at the University of Essex, and Special Adviser in the Crisis Response team at Amnesty International. Sam worked for more than a decade in broadcast journalism, and was head of News Exchange at the EuropeanBroadcasting Union between 2010 and 2013. He is a fellow of the Tow Center for Digital Journalism at Columbia University, a founding partner of First Draft News, which gives practical and ethical guidance in how to find, verify and publish content sourced from the social web. He is also a part ofthe Open Source for Human Rights project team at Swansea University. Alexa Koenig is the executive director of the Human Rights Center (winner of the 2015 MacArthur Award for Creative and Effective Institutions), and a lecturer at UC, Berkeley. She co-founded the Human Rights Investigations Lab which trains students to use open source methods to advance human rights.She is a member of the American Association for the Advancement of Science's Committee on Scientific Freedom and Responsibility, co-chair of the World Economic Forum's Global Future Council on Technology and Human Rights, and a member of the Technology Advisory Board of the International CriminalCourt's Office of the Prosecutor. She has a JD from the University of San Francisco and an MA and a PhD from UC Berkeley. Daragh Murray is Senior Lecturer at the University of Essex School of Law and Human Rights Centre, and the Director of the Digital Verification Unit based at the Human Rights Centre Clinic. His research focuses on issues relating to conflict and counter-terrorism, as regulated by the law of armedconflict and international human rights law. He has a particular interest in the regulation and engagement of non-State armed groups, and in the use of technology, particularly in an intelligence agency and law enforcement context. He is a former Government of Ireland IRCHSS Research Scholar, andhas a PhD in Law from the University of Essex, an LLM in International Human Rights Law from the Irish Centre for Human Rights, and an MSc in Computer Security and Forensics from Dublin City University.