To Kill a Democracy: India's Passage to Despotism (Hardcover) 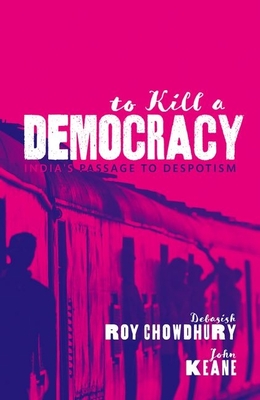 To Kill a Democracy: India's Passage to Despotism (Hardcover)


Not On Our Shelves—Ships in 1-5 Days
India is heralded as the world's largest democracy. Yet, there is now growing alarm about its democratic health. To Kill a Democracy gets to the heart of the matter. Combining poignant life stories with sharp scholarly insight, it rejects the belief that India was once a beacon of democracy but is now being ruined by the destructive forces of Modi-style populism. The book details the much deeper historical roots of the present-day assaults on civil liberties and
democratic institutions. Democracy, the authors also argue, is much more than elections and the separation of powers. It is a whole way of life lived in dignity, and that is why they pay special attention to the decaying social foundations of Indian democracy. In compelling fashion, the book
describes daily struggles for survival and explains how lived social injustices and unfreedoms rob Indian elections of their meaning, while at the same time feeding the decadence and iron-fisted rule of its governing institutions. Much more than a book about India, To Kill A Democracy argues that
what is happening in the country is globally important, and not just because every third person living in a democracy is an Indian. It shows that when democracies rack and ruin their social foundations, they don't just kill off the spirit and substance of democracy. They lay the foundations for
despotism.

Debasish Roy Chowdhury has written extensively on Indian politics and society and geopolitics. A journalist based in Hong Kong, he has lived and worked in Calcutta, Sao Paulo, Bangkok, and Beijing. He is a Jefferson Fellow and a recipient of multiple prizes, including the Human Rights Press Award, the Society of Publishers in Asia (SOPA) award and the Hong Kong News Award. John Keane is Professor of Politics at the University of Sydney and the WZB (Berlin). He is renowned globally for his creative thinking about democracy, and is the author of a number of distinguished books including The Life and Death of Democracy (Simon & Schuster, 2009) and The New Despotism(Harvard University Press, 2020).