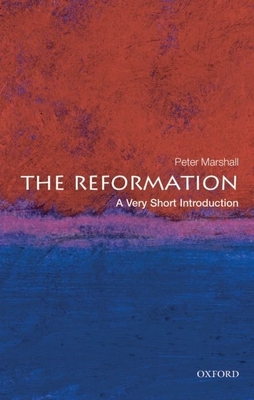 
In Stock—Click for Locations
The Reformation was a seismic event in European history, one which left an indelible mark on the modern world. In this Very Short Introduction, Peter Marshall illuminates the causes and consequences of this pivotal movement in western Christianity. The Reformation began as an argument about
what Christians needed to do to be saved, but rapidly engulfed society in a series of fundamental changes. This book provides a lively and up-to-date guide that explains doctrinal debates in a clear and non-technical way, but also explores the effects the Reformation had on politics, society, art,
and minorities. Marshall argues that the Reformation was not a solely European phenomenon, but that varieties of faith exported from Europe transformed Christianity into a truly world religion. The complex legacy of the Reformation is also assessed. Its religious fervor produced remarkable stories
of sanctity and heroism, and some extraordinary artistic achievements. But violence, holy war, and martyrdom were equally its products. A paradox of the Reformation--that it intensified intolerance while establishing pluralism--is one we still wrestle with today.
Peter Marshall is a Professor of History and Director of Graduate Studies in History at the University of Warwick.