Advancing the Ball: Race, Reformation, and the Quest for Equal Coaching Opportunity in the NFL (Law and Current Events Masters) (Hardcover) 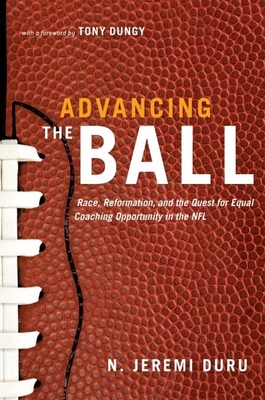 Advancing the Ball: Race, Reformation, and the Quest for Equal Coaching Opportunity in the NFL (Law and Current Events Masters) (Hardcover)


Special Order—Subject to Availability
Following the NFL's desegregation in 1946, opportunities became increasingly plentiful for African American players--but not African American coaches. Although Major League Baseball and the NBA made progress in this regard over the years, the NFL's head coaches were almost exclusively white up
until the mid-1990s. Advancing the Ball chronicles the campaign of former Cleveland Browns offensive lineman John Wooten to right this wrong and undo decades of discriminatory head coach hiring practices--an initiative that finally bore fruit when he joined forces with attorneys Cyrus Mehri and
Johnnie Cochran. Together with a few allies, the triumvirate galvanized the NFL's African American assistant coaches to stand together for equal opportunity and convinced the league to enact the Rooney Rule, which stipulates that every team must interview at least one minority candidate when
searching for a new head coach. In doing so, they spurred a movement that would substantially impact the NFL and, potentially, the nation. Featuring an impassioned foreword by Coach Tony Dungy, Advancing the Ball offers an eye-opening, first-hand look at how a few committed individuals initiated a
sea change in America's most popular sport and added an extraordinary new chapter to the civil rights story.

N. Jeremi Duru is Associate Professor of Law at Temple University. He has worked directly with the network of African American coaches in the NFL and brings an insider's perspective to his larger story about race and sports in contemporary American society.