Should Trees Have Standing?: Law, Morality, and the Environment (Paperback) 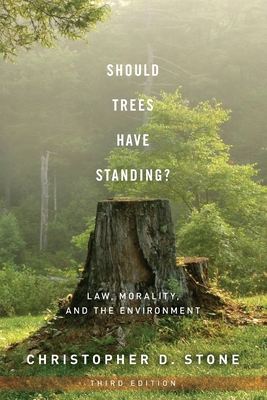 Should Trees Have Standing?: Law, Morality, and the Environment (Paperback)


Not On Our Shelves—Ships in 1-5 Days
(This book cannot be returned.)
Originally published in 1972, Should Trees Have Standing? was a rallying point for the then burgeoning environmental movement, launching a worldwide debate on the basic nature of legal rights that reached the U.S. Supreme Court. Now, in the 35th anniversary edition of this remarkably
influential book, Christopher D. Stone updates his original thesis and explores the impact his ideas have had on the courts, the academy, and society as a whole. At the heart of the book is an eminently sensible, legally sound, and compelling argument that the environment should be granted legal
rights. For the new edition, Stone explores a variety of recent cases and current events--and related topics such as climate change and protecting the oceans--providing a thoughtful survey of the past and an insightful glimpse at the future of the environmental movement. This enduring work
continues to serve as the definitive statement as to why trees, oceans, animals, and the environment as a whole should be bestowed with legal rights, so that the voiceless elements in nature are protected for future generations.

Christopher D. Stone is J. Thomas McCarthy Trustee Chair in Law at the University of Southern California School of Law. A leading advocate for the environment, he has written for Harper's, The New York Times, The Nation, Boston Globe, and Los Angeles Times.