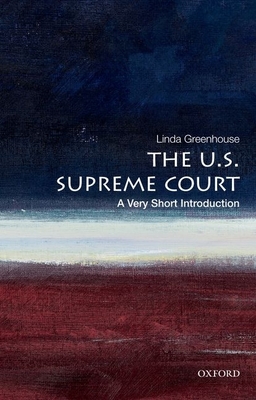 Linda Greenhouse, in her The U.S. Supreme Court: A Very Short Introduction (Oxford Univ., $11.95), lucidly informs us about the role, importance, and functioning of the Judiciary and her reasons why we should be informe. -  David Cohen — From The Role and History of the Supreme Court

For 30 years, Pulitzer Prize-winning journalist Linda Greenhouse chronicled the activities of the U.S. Supreme Court and its justices as a correspondent for the New York Times. In this Very Short Introduction, she draws on her deep knowledge of the court's history and of its written and unwritten rules to show readers how the Supreme Court really works. Greenhouse offers a fascinating institutional biography of a place and its people--men and women who exercise great power but whose names and faces are unrecognized by many Americans and whose work often appears cloaked in mystery. How do cases get to the Supreme Court? How do the justices go about deciding them? What special role does the chief justice play? What do the law clerks do? How does the court relate to the other branches of government? Greenhouse answers these questions by depicting the justices as they confront deep constitutional issues or wrestle with the meaning of confusing federal statutes. Throughout, the author examines many individual Supreme Court cases to illustrate points under discussion, ranging from Marbury v. Madison, the seminal case which established judicial review, to the recent District of Columbia v. Heller (2008), which struck down the District of Columbia's gun-control statute and which was, surprisingly, the first time in its history that the Court issued an authoritative interpretation of the Second Amendment. To add perspective, Greenhouse also compares the Court to foreign courts, reveali