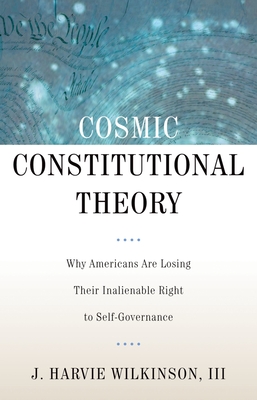 
Not On Our Shelves—Ships in 1-5 Days
American constitutional law has undergone a transformation. Issues once left to the people have increasingly become the province of the courts. Subjects as diverse as abortion rights and firearms regulations, health care reform and counterterrorism efforts, not to mention a millennial
presidential election, are more and more the domain of judges. What sparked this development? In this engaging volume, Judge J. Harvie Wilkinson argues that America's most brilliant legal minds have launched a set of cosmic constitutional theories that, for all their value, are undermining self-governance. Thinkers as diverse as Justices William Brennan and
Antonin Scalia, Professor John Hart Ely, Judges Robert Bork and Richard Posner, have all produced seminal interpretations of our Founding document, but ones that promise to imbue courts with unprecedented powers. While crediting the theorists for the sparkling quality of their thoughts, Judge
Wilkinson argues they will slowly erode the role of representative institutions in America and leave our children bereft of democratic liberty. The loser in all the theoretical fireworks is the old and honorable tradition of judicial restraint. The judicial modesty once practiced by Learned Hand, John Harlan, and Oliver Wendell Holmes has given way to competing schools of liberal and conservative activism seeking sanctuary in Living
Constitutionalism, Originalism, Process Theory, or the supposedly anti-theoretical creed of Pragmatism. Each of these seemingly disparate theories promises their followers an intellectually respectable route to congenial political outcomes from the bench. Judge Wilkinson calls for a plainer,
simpler, self-disciplined commitment to judicial restraint and democratic governance, a course that alas may be impossible so long as the cosmic constitutionalists so dominate contemporary legal thought.

J. Harvie Wilkinson III was appointed to the United States Court of Appeals for the Fourth Circuit by Ronald Reagan. He has served on that court since 1984 and as its Chief Judge from 1996 to 2003. He has been frequently on the short list of prospects for the Supreme Court and is regarded as oneof the nation's premier appellate jurists. His books include From Brown to Bakke: The Supreme Court and School Integration, 1954-1978. He lives in Charlottesville, Virginia.