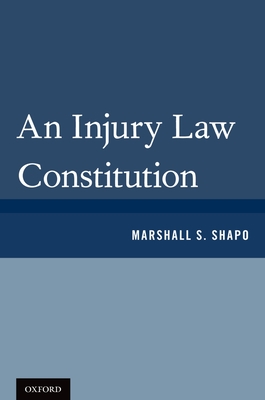 
Special Order—Subject to Availability
Author Marshall S. Shapo presents the argument that the body of law Americans have developed concerning responsibility for injuries and prevention of injuries has some of the qualities of a constitution--a fundamental set of principles that govern relations among people and between people and
corporate and governmental institutions. This 'injury law constitution' includes tort law, legislative compensation systems like workers compensation, and the many statutes that regulate the safety of risky activities and of products ranging from drugs and medical devices to automobiles and
cigarettes. An Injury Law Constitution presents a novel thesis that embraces leading features of the American law of injuries. Professor Shapo's analysis, into which he weaves the history of these varied systems of law, links them to the unique compensation plan devised for the victims of the
September 11th attacks on the World Trade Center. Professor Shapo examines how our injury law reflects deeply held views in American society on risk and injury, indicating how the injury law constitution serves as a guide to the question of what it means to be an American. Refusing to accept easy
academic formulas, An Injury Law Constitution captures the reality of how people respond to injury risks in functional contexts involving diverse activities and products.