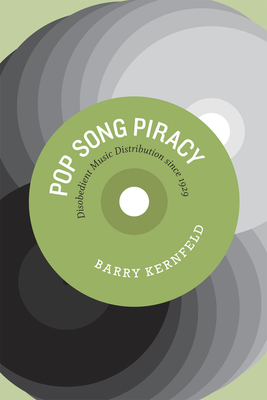 
Special Order—Subject to Availability
The music industry’s ongoing battle against digital piracy is just the latest skirmish in a long conflict over who has the right to distribute music. Starting with music publishers’ efforts to stamp out bootleg compilations of lyric sheets in 1929, Barry Kernfeld’s Pop Song Piracy details nearly a century of disobedient music distribution from song sheets to MP3s. In the 1940s and ’50s, Kernfeld reveals, song sheets were succeeded by fake books, unofficial volumes of melodies and lyrics for popular songs that were a key tool for musicians. Music publishers attempted to wipe out fake books, but after their efforts proved unsuccessful they published their own. Pop Song Piracy shows that this pattern of disobedience, prohibition, and assimilation recurred in each conflict over unauthorized music distribution, from European pirate radio stations to bootlegged live shows. Beneath this pattern, Kernfeld argues, there exists a complex give and take between distribution methods that merely copy existing songs (such as counterfeit CDs) and ones that transform songs into new products (such as file sharing). Ultimately, he contends, it was the music industry’s persistent lagging behind in creating innovative products that led to the very piracy it sought to eliminate.

Barry Kernfeld is on the staff of the Special Collections Library of the Pennsylvania State University. He is the author of The Story of Fake Books: Bootlegging Songs to Musicians and What to Listen for in Jazz, and he is the editor of The New Grove Dictionary of Jazz.

"Kenfeld provides a welcome addition to the intellectual property rights debate in music. His book addresses the historical linkages between music piracy and the music business, and how both are deeply entangled. The fact that the author is a staff member at the special collections library at Pennsylvania State University is clear. The archival data used throughout this book is the result of a very thorough engagement with material spanning nearly a century."
— Cultural Studies

“Barry Kernfeld’s rich and stimulating book makes a significant contribution to current debates over technology, copying, piracy, and the political economy of the music industry. He clarifies not just the history of legal and illegal music copying but also the arguments about these practices and the complicated relationships that have resulted among the law, corporations, entrepreneurs, consumers, and the media.”

“Pop Song Piracy is original, insightful, learned without being stuffy and, in the end, a profound investigation of the ways people have tried (and often succeeded) in getting the popular music they wanted without paying for it. Anyone interested in the business of music will want to learn what Barry Kernfeld has to tell us.”