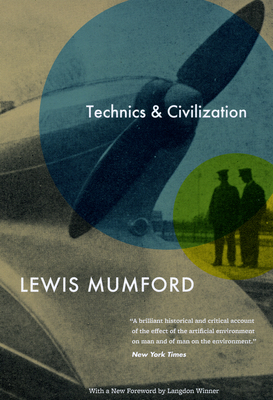 Technics and Civilization first presented its compelling history of the machine and critical study of its effects on civilization in 1934—before television, the personal computer, and the Internet even appeared on our periphery.

Drawing upon art, science, philosophy, and the history of culture, Lewis Mumford explained the origin of the machine age and traced its social results, asserting that the development of modern technology had its roots in the Middle Ages rather than the Industrial Revolution. Mumford sagely argued that it was the moral, economic, and political choices we made, not the machines that we used, that determined our then industrially driven economy. Equal parts powerful history and polemic criticism, Technics and Civilization was the first comprehensive attempt in English to portray the development of the machine age over the last thousand years—and to predict the pull the technological still holds over us today.

“The questions posed in the first paragraph of Technics and Civilization still deserve our attention, nearly three quarters of a century after they were written.”—Journal of Technology and Culture

Lewis Mumford (1895–1990) was a writer whose scope encompassed literary criticism, architecture, history, urban sociology, and philosophy. The author of over thirty books, he was also the architectural critic for The New Yorker for over thirty years. He was eventually honored with the United States Medal of Freedom and Knight of the Order of the British Empire.

“A brilliant historical and critical account of the effect of the artificial environment on man and of man on the environment, a necessary account, one for which we have waited too long in English.”
— The New York Times