The Modern Myths: Adventures in the Machinery of the Popular Imagination (Hardcover) 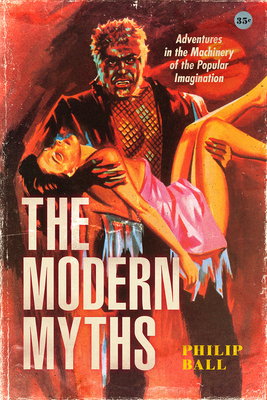 The Modern Myths: Adventures in the Machinery of the Popular Imagination (Hardcover)


Not On Our Shelves—Ships in 1-5 Days
With The Modern Myths, brilliant science communicator Philip Ball spins a new yarn. From novels and comic books to B-movies, it is an epic exploration of literature, new media and technology, the nature of storytelling, and the making and meaning of our most important tales.

Myths are usually seen as stories from the depths of time—fun and fantastical, but no longer believed by anyone. Yet, as Philip Ball shows, we are still writing them—and still living them—today. From Robinson Crusoe and Frankenstein to Batman, many stories written in the past few centuries are commonly, perhaps glibly, called “modern myths.” But Ball argues that we should take that idea seriously. Our stories of Dracula, Dr. Jekyll and Mr. Hyde, and Sherlock Holmes are doing the kind of cultural work that the ancient myths once did. Through the medium of narratives that all of us know in their basic outline and which have no clear moral or resolution, these modern myths explore some of our deepest fears, dreams, and anxieties. We keep returning to these tales, reinventing them endlessly for new uses. But what are they really about, and why do we need them? What myths are still taking shape today? And what makes a story become a modern myth?

In The Modern Myths, Ball takes us on a wide-ranging tour of our collective imagination, asking what some of its most popular stories reveal about the nature of being human in the modern age.
Philip Ball is a freelance writer and broadcaster, and was an editor at Nature for more than twenty years. He writes regularly in the scientific and popular media and has written many books on the interactions of the sciences, the arts, and wider culture, including H2O: A Biography of Water and The Music Instinct. His book Critical Mass won the 2005 Aventis Prize for Science Books. Ball is also a presenter of Science Stories, the BBC Radio 4 series on the history of science. He trained as a chemist at the University of Oxford and as a physicist at the University of Bristol. He lives in London.
"Ball does an impressive job with the literary histories behind each iconic title, assembling a set of origin stories rich in cultural history and imagination. . . . To Ball, mythic writing is where the conditions of irrationality, superstition, and enchantment persist: forms of wonder that depend on the disconnect between what we know for sure and what we simply believe."
— Sophie Gee

"Myths themselves commonly embody the religious beliefs of ancient or preliterate peoples, but Ball suggests that we are still generating them. Subtitled Adventures in the Machinery of the Popular Imagination, his book, The Modern Myths, cogently argues for the originality and potent cultural resonance of Robinson Crusoe, Victor Frankenstein and his creature, Sherlock Holmes, Dracula, alien invaders like those of H.G. Wells’s War of the Worlds, Batman, and even zombies. All these soon escaped from their original creators’ control and are now at large, their stories capable of multiple and even conflicting interpretations. The key to the mythic mode, asserts Ball, is ambivalence."
— Michael Dirda

"A persistent myth of the modern West is that it has outgrown the need for myths, along with religion, magic and other 'irrational' beliefs of the benighted past. This triumphalist story of rationality was proclaimed by Enlightenment philosophers and documented by later social scientists; through the 1990s, 'the disenchantment of the world' became an incantation within the parched groves of academe. Ball is among those who counter that enchantment and modernity aren’t incompatible. In The Modern Myths, he makes a persuasive case that myth isn’t gone but can be found in stories closer to our current obsessions such as science and technology, globalization and individual psychology. . . . His provocations to debate are among the book's many pleasures."
— Michael Saler

"Ball makes a case that myths are not things of the past. Modern myths, Ball posits, are still being written and are just as crucial and revelatory as ancient ones."
— Publishers Weekly

"From acclaimed popular science writer Ball comes a fresh look at the modern legends that shape our perception of reality. Stories like Dracula, Batman, Sherlock Holmes, or Frankenstein, which we keep retelling and reimagining, are doing the kind of cultural work that ancient myths and fairy tales once did. How do they operate, and why do we need them? And what tales will come to be the new myths of the future?"
— Bookseller

"Modern myths—of which Ball identifies seven, starting with Robinson Crusoe and ending with Batman—are not, despite their origins in specific texts, so much singular narratives as ‘evolving web[s] of many stories—interweaving, interacting, contradicting each other’—but with one thing in common: ‘[A] rugged, elemental, irreducible kernel charged with the magical power of generating versions of the story.’ This fecund capacity to produce new narratives is what allows these myths to do their ‘cultural work’: they ‘erect a rough-hewn framework on which to hang our anxieties, fears, and dreams.’"
— Rob Latham

“Aquarians love people, and they love their stories, too—that’s one of the reasons they make such great writers (and readers). They will be fascinated and inspired by this book, which investigates many of our ‘modern myths’—what they are, why we love them, and why we need them, from Dracula to Sherlock Holmes. They’re all stories we know—but what do they know about us?”
— Emily Temple

Most Anticipated Books of May 2021
— Book Culture

"To Ball, 'myth' doesn’t just mean a set of ancient stories—Greek mythology as one canon, Norse another, etc. Instead, it refers to a mode of story-making that still exists today. In fact, it seems to be a way of telling stories that we can’t help but enact; Ball believes these modern myths are coming into being almost without our realizing it, and that, by recognizing their existence and being more alert to their power, we might better understand ourselves."
— Fare Forward

"Ball’s fascinating study concerns itself with seven stories from the eighteenth century through the present that have become 'modern myths,' a concept he blueprints in the opening chapter and elaborates along the way. . . . An admirable amount of research has clearly gone into each of the seven case studies. The material is well-organized and the writing lucid, often snappy. . . . Our exuberantly guided tour of these modern myths is enlivened by fun facts."
— LOCUS

"Funny and insightful reading for anybody interested in popular culture and how it was impacted by the current hunger for myths and their modern incarnations."
— Popcultureshelf.com

"Ball is an exceptional writer and researcher, but with this and his other books, he demonstrates that there is an audience and appetite, beyond the field’s confines, for works that tell sophisticated stories about science and society. The book also affirms the value of the humanities for understanding the field’s central problems."
— Medium

"There are different ideas about what makes a myth exactly, but most agree that myths tell us something fundamental about human nature. We’re familiar with Greek myths, but Philip Ball wonders what more recent stories may have been elevated to mythic status, even if we might not think of them in those specific terms. Ball, a writer on science, here ascends the cliff and climbs into the cave to wrestle with those unscientific, literary creations that have become embedded in our collective psyche."
— Insights

"Ball begins by making the case for the modern myth, highlighting the attributes that allow some stories to grow beyond their origins and disregarding notions that the modern cannot be mythical. Ball shows how these characters and stories have seeped into collective consciousness—so much so that one no longer has to read the original texts to understand the stories or characters. He further illustrates how modern myths have been reimagined and repackaged to reflect modern worries, allowing the reader to come to terms with the conditions of existence. The Modern Myths is well researched, as evidenced by twenty-two pages of notes, eight pages of bibliography, and footnotes and images scattered throughout. Ball draws parallels between original works and modern interpretations and representations in films, television, comic books, and B-movies. Readers will find Ball’s arguments clear and easy to understand. Highly recommended."
— Choice

"For those of us who care about mythopoetic fiction, this is a ringing endorsement of the significance of what we study."
— Mythlore

“Ball always brings your attention to things that were in your field of vision all along but you just hadn't noticed. He gives you the tools to investigate and dig deeper. The Modern Myths makes the world a more thrilling place. This is a book filled with delight and curiosity that will change the way you see the stories that are all around you.”
— Robin Ince

“The Modern Myths is a very impressive piece of writing. It is sharp. It is witty. It is deeply insightful in too many places to list. Ball’s erudition on these topics is extraordinary, really. How did he read all of this? And how did he see all of these movies? Does he sleep? A very fine study of seven really important stories in modern literature, fantasy, and film.”
— Jeffrey J. Kripal, author of "Mutants and Mystics: Science Fiction, Superhero Comics, and the Paranormal"