Bankers in the Ivory Tower: The Troubling Rise of Financiers in US Higher Education (Hardcover) 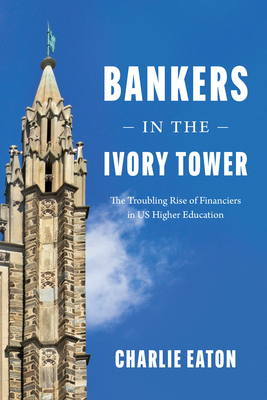 Bankers in the Ivory Tower: The Troubling Rise of Financiers in US Higher Education (Hardcover)


On Our Shelves Now at:
Exposes the intimate relationship between big finance and higher education inequality in America.

Elite colleges have long played a crucial role in maintaining social and class status in America while public universities have offered a major stepping-stone to new economic opportunities. However, as Charlie Eaton reveals in Bankers in the Ivory Tower, finance has played a central role in the widening inequality in recent decades, both in American higher education and in American society at large.

With federal and state funding falling short, the US higher education system has become increasingly dependent on financial markets and the financiers that mediate them. Beginning in the 1980s, the government, colleges, students, and their families took on multiple new roles as financial investors, borrowers, and brokers. The turn to finance, however, has yielded wildly unequal results. At the top, ties to Wall Street help the most elite private schools achieve the greatest endowment growth through hedge fund investments and the support of wealthy donors. At the bottom, takeovers by private equity transform for-profit colleges into predatory organizations that leave disadvantaged students with massive loan debt and few educational benefits. And in the middle, public universities are squeezed between incentives to increase tuition and pressures to maintain access and affordability. Eaton chronicles these transformations, making clear for the first time just how tight the links are between powerful financiers and America’s unequal system of higher education.
Charlie Eaton is assistant professor of sociology at the University of California, Merced.
"The book is a vivid reminder of how rich, exclusive and small the US Ivy League universities are. . . . But the book shows, too, the importance of universities. They can be a means of entrenching privilege or of spreading
opportunity. A well-designed system for funding universities can be a crucial driver of social mobility. But in the US it is not working well."
— Financial World

"Bankers in the Ivory Tower offers a fascinating and data-driven investigation on how finance is transforming higher education in America for the worse. Instead of an engine of opportunity, it is becoming fuel for inequality with snowballing endowments for the top, student debt replacing public funding for the middle, and for-profit predation for the bottom. A must read."
— Emmanuel Saez, University of California, Berkeley, Chancellor's Professor of Tax Policy and Public Finance

"Until now, no one has connected the dots between ever-more-rarified Ivy walls, the expansion of predatory for-profit institutions, and the financialization of the US economy. With impeccable research, Eaton brilliantly shows that what happens at the top and what happens at the bottom (not to mention in the middle) are more closely connected than you think—and that the common thread is high finance."
— Elizabeth Popp Berman, University of Michigan, associate professor of organizational studies

“Many have criticized spending choices at colleges and universities and blamed them for both the rising cost of higher education and the corresponding, corrosive spread of student debt. But Eaton identifies the complex relationships that tie financial elites to these highly selective schools, which they and other wealthy families disproportionately attend. Financiers both advise and often help govern universities, guiding them to operate more like profit-seeking businesses, and financiers also function as intermediaries in the provision of student debt. The argument of the book makes the overrepresentation of socioeconomically privileged students on the nation’s most selective campuses look unsurprising and indeed, almost inevitable.”
— Jonathan Glater, University of California, Berkeley, professor of law

“As elite colleges marvel at how sharply their multibillion-dollar endowments have risen from year to year, they fail to make the connection with the rise in for-profit colleges sinking students into high debt and low salaries. By following the investors, the hedge funds, the college governing boards, and the students whose lives they trample, Eaton shows how the financial oligarchy that descends from and upholds the Ivory Tower has taken the public out of our public goods. A sobering and fact-filled account with an unexpected glimpse into the possible.”
— Frederick F Wherry, The Townsend Martin, Class of 1917 Professor of Sociology at Princeton University

"A sobering look at how a generation of bankers transformed higher education, generating massive endowments for elite schools—and leaving a legacy of scarcity and debt for everyone else. Carefully researched and forcefully argued, Bankers in the Ivory Tower is essential reading for anyone who cares about higher education, school loans, or the social life of finance."