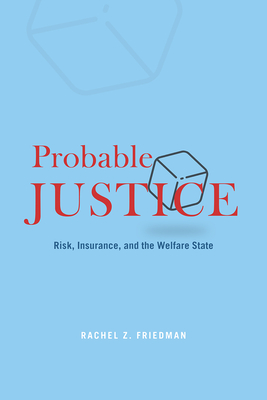 
Not On Our Shelves—Ships in 1-5 Days
Decades into its existence as a foundational aspect of modern political and economic life, the welfare state has become a political cudgel, used to assign blame for ballooning national debt and tout the need for personal responsibility. At the same time, it affects nearly every citizen and permeates daily life—in the form of pension, disability, and unemployment benefits, healthcare and parental leave policies, and more. At the core of that disjunction is the question of how we as a society decide who should get what benefits—and how much we are willing to pay to do so.

Probable Justice​ traces a history of social insurance from the eighteenth century to today, from the earliest ideas of social accountability through the advanced welfare state of collective responsibility and risk. At the heart of Rachel Z. Friedman’s investigation is a study of how probability theory allows social insurance systems to flexibly measure risk and distribute coverage. The political genius of social insurance, Friedman shows, is that it allows for various accommodations of needs, risks, financing, and political aims—and thereby promotes security and fairness for citizens of liberal democracies.
Rachel Z. Friedman is a member of the Buchmann Faculty of Law and a faculty affiliate of the Edmond J. Safra Center for Ethics at Tel Aviv University.

"Tracing a conceptual and political history of the practice from the time of the French Revolution through the present, Friedman argues that social insurance is a distributive regime that by its nature combines distinct principles and aims, including individual liberty or autonomy and social equality or solidarity. Her argument has implications for the definition, protection,and promotion of social rights and the role of anti-discrimination law with respect to private insurance."
— Law & Social Inquiry

“Probable Justice advances a strikingly original—and quite brilliant—argument about the common duality of probability as a philosophical concept and social insurance as a political expedient, both of which Friedman reveals are essentially ‘Janus-faced.’”
— William P. Deringer, author of Calculated Values: Finance, Politics, and the Quantitative Age

“Friedman powerfully brings together three traditions of thought: theory on risk and probability, ethical principles of distributive justice, and political theory on the purpose of social insurance or the welfare state. Her image of civil society as a great mutual insurer with coercive power will reorient political thinking on the welfare state.”
— James Franklin, author of The Science of Conjecture: Evidence and Probability Before Pascal

“Probable Justice is a brilliant synthesis of the history of insurance and theories of probability. It combines social theory (e.g., social insurance and the welfare state) with an outstanding discussion of the ambiguities in probability theory. One of the most illuminating books I have encountered on the influence of probabilistic ideas on theories of justice.”
— Morton Horwitz, author of The Warren Court and the Pursuit of Justice

“Friedman’s thoughtful and thought-provoking study reveals how diverse conceptions of probability have always been morally tinged. Whether framed as prudential individualism, frequentist solidarity, or a subjective bet, how we calculate risk turns out to have far-reaching consequences for how we think about what the state owes its citizens and citizens owe each other.”
— Lorraine Daston, coauthor of How Reason Almost Lost Its Mind: The Strange Career of Cold War Rationality