A Hedonist Manifesto: The Power to Exist (Insurrections: Critical Studies in Religion) (Hardcover) 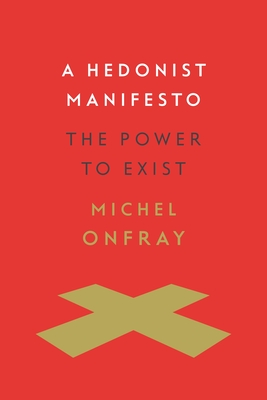 A Hedonist Manifesto: The Power to Exist (Insurrections: Critical Studies in Religion) (Hardcover)

Michael Onfray passionately defends the potential of hedonism to resolve the dislocations and disconnections of our melancholy age. In a sweeping survey of history's engagement with and rejection of the body, he exposes the sterile conventions that prevent us from realizing a more immediate, ethical, and embodied life. He then lays the groundwork for both a radical and constructive politics of the body that adds to debates over morality, equality, sexual relations, and social engagement, demonstrating how philosophy, and not just modern scientism, can contribute to a humanistic ethics.

Onfray attacks Platonic idealism and its manifestation in Judaic, Christian, and Islamic belief. He warns of the lure of attachment to the purportedly eternal, immutable truths of idealism, which detracts from the immediacy of the world and our bodily existence. Insisting that philosophy is a practice that operates in a real, material space, Onfray enlists Epicurus and Democritus to undermine idealist and theological metaphysics; Nietzsche, Bentham, and Mill to dismantle idealist ethics; and Palante and Bourdieu to collapse crypto-fascist neoliberalism. In their place, he constructs a positive, hedonistic ethics that enlarges on the work of the New Atheists to promote a joyful approach to our lives in this, our only, world.

Michel Onfray is a French philosopher and public intellectual who founded and teaches at the free Popular University of Caen. He has written more than sixty books, many of them best sellers, including Atheist Manifesto: The Case Against Christianity, Judaism, and Islam and the award-winning Sculpting the Self. Joseph McClellan earned his Ph.D. from Columbia University and has taught Asian and Western philosophy and religion at several universities.