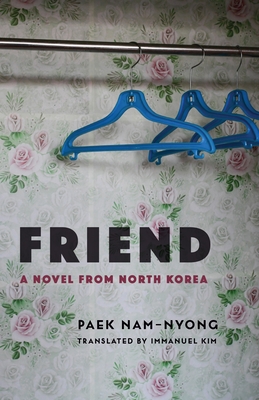 
On Our Shelves Now at:
Paek Nam-nyong's Friend is a tale of marital intrigue, abuse, and divorce in North Korea. A woman in her thirties comes to a courthouse petitioning for a divorce. As the judge who hears her statement begins to investigate the case, the story unfolds into a broader consideration of love and marriage. The novel delves into its protagonists' past, describing how the couple first fell in love and then how their marriage deteriorated over the years. It chronicles the toll their acrimony takes on their son and their careers alongside the story of the judge's own marital troubles. A best-seller in North Korea, where Paek continues to live and write, Friend illuminates a side of life in the DPRK that Western readers have never before encountered. Far from being a propagandistic screed in praise of the Great Leader, Friend describes the lives of people who struggle with everyday problems such as marital woes and workplace conflicts. Instead of socialist-realist stock figures, Paek depicts complex characters who wrestle with universal questions of individual identity, the split between public and private selves, the unpredictability of existence, and the never-ending labor of maintaining a relationship. This groundbreaking translation of one of North Korea's most popular writers offers English-language readers a page-turner full of psychological tension as well as a revealing portrait of a society that is typically seen as closed to the outside world.
Paek Nam-nyong is one of the most renowned writers in North Korea today. He was born in 1949 in Hamhŭng and worked in a steel factory for many years before enrolling at Kim Il Sung University. He worked in the Writer's Union and later joined the elite group of writers called April 15th Literary Production Unit. Immanuel Kim is Korea Foundation and Kim-Renaud Associate Professor of Korean Literature and Culture Studies at George Washington University. He is the author of Rewriting Revolution: Women, Sexuality, and Memory in North Korean Fiction (2018).