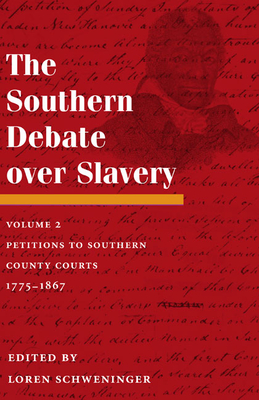 An incomparably rich source of period information, the second volume of The Southern Debate over Slavery offers a representative and extraordinary sampling of the thousands of petitions about issues of race and slavery that southerners submitted to county courts between the American Revolution and Civil War. These petitions, filed by slaveholders and nonslaveholders, slaves and free blacks, women and men, abolitionists and staunch defenders of slavery, constitute a uniquely important primary source. The collection records with great immediacy and minute detail the dynamics and legal restrictions that shaped southern society.

Loren Schweninger is the Elizabeth Rosenthal Excellence Professor of History at the University of North Carolina, Greensboro, and is editor of The Southern Debate over Slavery: Volume 1, Petitions to Southern Legislatures, 1778-1864.

“When your Orator returned Home he found his Wife in Tears, and upon inquiery of the cause, she informed your Orator that the aforesaid Haley had Grossly abused and insulted her, and amongst other terms of opprobriousness had called his said Wife a Damned Liar--upon which your Orator pusued the said Haley . . . and upon overtaking him, inflicted Several blows, for the gross and degrading insult offered his Wife--and your Orator hopes that such a State of insubbordination in a man of his Colour, would well justify the Deed.”--from “Joseph B. Abrahams to the Chancery Court, Henrico County, Virginia, 1806”

"For serious scholars of both American slavery and pre-Civil War America this volume is essential."--H-CivWar

"A landmark feat of historical discovery and retrieval. . . . A truly fascinating glimpse into the thoughts and personal conduct of otherwise obscure men and women of both races in the pre-emancipation south."--Civil War Book Review

"A terrific addition to our knowledge about slavery."--The North Carolina Historical Review

"Schweninger has compiled another extraordinary volume of primary source documents revealing the scope and details of the experience of slavery in the US South. . . . Highly recommended."--Choice

“The documents reveal a number of complicated truths about the system of slavery. . . . Useful material for both lectures and discussions, the petitions collected here will serve as a valuable teaching resource.”--The Journal of Southern History