From Occupation to Occupy: Antisemitism and the Contemporary American Left (Studies in Antisemitism) (Hardcover) 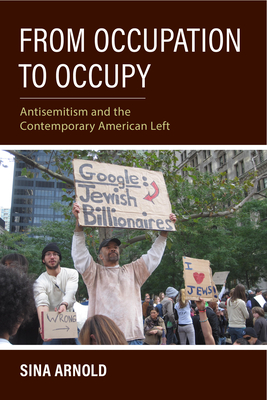 From Occupation to Occupy: Antisemitism and the Contemporary American Left (Studies in Antisemitism) (Hardcover)

The recent rise of antisemitism in the United States has been well documented and linked to groups and ideologies associated with the far right. In From Occupation to Occupy, Sina Arnold argues that antisemitism can also be found as an "invisible prejudice" on the left.

Based on participation in left-wing events and demonstrations, interviews with activists, and analysis of left-wing social movement literature, Arnold argues that a pattern for enabling antisemitism exists. Although open antisemitism on the left is very rare, there are recurring instances of "antisemitic trivialization," in which antisemitism is not perceived as a relevant issue in its own right, leading to a lack of empathy for Jewish concerns and grievances. Arnold's research also reveals a pervasive defensiveness against accusations of antisemitism in left-wing politics, with activists fiercely dismissing the possibility of prejudice against Jews within their movements and invariably shifting discussions to critiques of Israel or other forms of racism.

From Occupation to Occupy offers potential remedies for this situation and suggests that a progressive political movement that takes antisemitism seriously can be a powerful force for change in the United States.