Salvation and Suicide: An Interpretation of Jim Jones, the Peoples Temple, and Jonestown (Paperback) 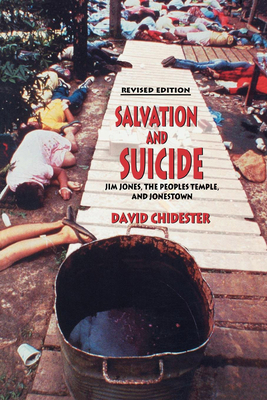 Salvation and Suicide: An Interpretation of Jim Jones, the Peoples Temple, and Jonestown (Paperback)

Praise for the first edition:
This] ambitious and courageous book is a] benchmark of theology by which questions about the meaningful history of the Peoples Temple may be measured. --Journal of the American Academy of Religion

Re-issued in recognition of the 25th anniversary of the mass suicides at Jonestown, this revised edition of David Chidester's pathbreaking book features a new prologue that considers the meaning of the tragedy for a post-Waco, post-9/11 world. For Chidester, Jonestown recalls the American religious commitment to redemptive sacrifice, which for Jim Jones meant saving his followers from the evils of capitalist society. Jonestown is ancient history, writes Chidester, but it does provide us with an opportunity to reflect upon the strangeness of familiar . . . promises of redemption through sacrifice.

David Chidester is Chair of Religious Studies at the University of Cape Town and author or editor of 20 books, including American Sacred Space (IUP, 1995), edited with Edward T. Linenthal, and Christianity: A Global History.