Human Frontiers: The Future of Big Ideas in an Age of Small Thinking (Hardcover) 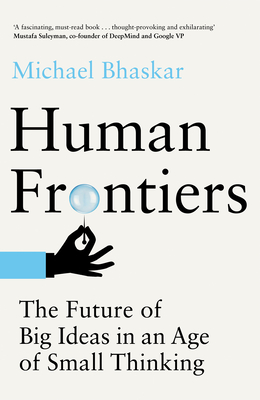 Human Frontiers: The Future of Big Ideas in an Age of Small Thinking (Hardcover)


Not On Our Shelves—Ships in 1-5 Days
Why has the flow of big, world-changing ideas slowed down? A provocative look at what happens next at the frontiers of human knowledge.

The history of humanity is the history of big ideas that expand our frontiers—from the wheel to space flight, cave painting to the massively multiplayer game, monotheistic religion to quantum theory. And yet for the past few decades, apart from a rush of new gadgets and the explosion of digital technology, world-changing ideas have been harder to come by. Since the 1970s, big ideas have happened incrementally—recycled, focused in narrow bands of innovation. In this provocative book, Michael Bhaskar looks at why the flow of big, world-changing ideas has slowed, and what this means for the future.

Bhaskar argues that the challenge at the frontiers of knowledge has arisen not because we are unimaginative and bad at realizing big ideas but because we have already pushed so far. If we compare the world of our great-great-great-grandparents to ours today, we can see how a series of transformative ideas revolutionized almost everything in just a century and a half. But recently, because of short-termism, risk aversion, and fractious decision making, we have built a cautious, unimaginative world. Bhaskar shows how we can start to expand the frontier again by thinking big—embarking on the next Universal Declaration of Human Rightsor Apollo mission—and embracing change.
Michael Bhaskar is a writer, researcher, and cofounder of Canelo Digital Publishing. The author of Curation and The Content Machine, he spent two years as a consultant Writer-in-Residence at DeepMind, the leading AI research lab. He has been featured in the Guardian, and the Financial Times and on the BBC, among other media outlets.
Best business and leadership books of 2021, Amazon.com (Editor's Picks)

"We live in an era of endless discovery and development, but are our best days already behind us? This is the question at the heart of Michael Bhaskar’s fascinating book, which asks whether, after decades and centuries of progress, society has now reached a point of stagnation. Bhaskar is a reassuringly positive and often witty guide to the opportunities that technology and medicine alike can still offer humanity, but he tempers his optimism with clear-sighted recognition that we could have, frustratingly, already reached our peak."—The Guardian