Sexus Animalis: There Is Nothing Unnatural in Nature (Hardcover) 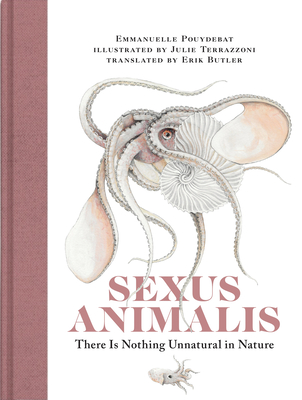 Sexus Animalis: There Is Nothing Unnatural in Nature (Hardcover)


In Stock—Click for Locations
An illustrated guide to the amazingly multifarious sex lives of animals, from elephants and bonobos to butterflies and bedbugs.

Emmanuelle Pouydebat, a natural history researcher, tells us about gutter penises, double penises, detachable penises, and corkscrew-shaped penises, as well as vaginas built for storage and clitorises with thorns. (Perhaps unsurprisingly, there’s more data about animal penises than animal vaginas and clitorises.) She explains how the ostrich achieves an erection, describes the courtship of pygmy chameleons, and recounts how the female short-beaked echidna chooses a partner. She reports on sexual assault among animals—there’s evidence that half of female mallards are sexually assaulted—and explains how masturbation helps squirrels avoid sexually transmitted diseases. It seems that animals have been composing their own Kama Sutra throughout the ages. Striking color illustrations accompany the text.
Emmanuelle Pouydebat is a permanent researcher employed by the CNRS (French National Center for Scientific Research), working at the Muséum National d’Histoire Naturelle in Paris. She is the author of Atlas of Poetic Zoology (MIT Press).