The Evolution of Agency: Behavioral Organization from Lizards to Humans (Hardcover) 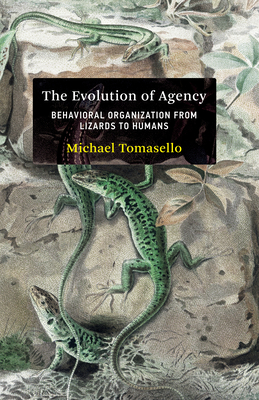 The Evolution of Agency: Behavioral Organization from Lizards to Humans (Hardcover)


Not On Our Shelves—Ships in 1-5 Days
A leading developmental psychologist proposes an evolutionary pathway to human psychological agency.

Nature cannot build organisms biologically prepared for every contingency they might possibly encounter. Instead, Nature builds some organisms to function as feedback control systems that pursue goals, make informed behavioral decisions about how best to pursue those goals in the current situation, and then monitor behavioral execution for effectiveness. Nature builds psychological agents. In a bold new theoretical proposal, Michael Tomasello advances a typology of the main forms of psychological agency that emerged on the evolutionary pathway to human beings.

Tomasello outlines four main types of psychological agency and describes them in evolutionary order of emergence. First was the goal-directed agency of ancient vertebrates, then came the intentional agency of ancient mammals, followed by the rational agency of ancient great apes, ending finally in the socially normative agency of ancient humans. Each new form of psychological organization represented increased complexity in the planning, decision-making, and executive control of behavior. Each also led to new types of experience of the environment and, in some cases, of the organism’s own psychological functioning, leading ultimately to humans’ experience of an objective and normative world that governs all of their thoughts and actions. Together, these proposals constitute a new theoretical framework that both broadens and deepens current approaches in evolutionary psychology.
Michael Tomasello is Professor of Psychology and Neuroscience at Duke University and Emeritus Director at the Max Planck Institute for Evolutionary Anthropology in Leipzig. His recent books include Becoming Human, A Natural History of Human Morality, A Natural History of Human Thinking, Origins of Human Communication, and Why We Cooperate (the last two published by the MIT Press).