"Well, Doc, You're In": Freeman Dyson’s Journey through the Universe (Hardcover) 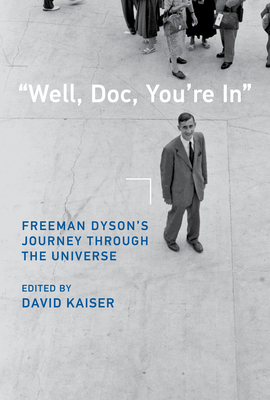 "Well, Doc, You're In": Freeman Dyson’s Journey through the Universe (Hardcover)


On Our Shelves Now at:
The life and work of Freeman Dyson—renowned scientist, visionary, and iconoclast—and his particular way of thinking about deep questions.

Freeman Dyson (1923–2020)—renowned scientist, visionary, and iconoclast—helped invent modern physics. Not bound by disciplinary divisions, he went on to explore foundational topics in mathematics, astrophysics, and the origin of life. General readers were introduced to Dyson’s roving mind and heterodox approach in his 1979 book Disturbing the Universe, a poignant autobiographical reflection on life and science. “Well, Doc, You’re In” (the title quotes Richard Feynman’s remark to Dyson at a physics conference) offers a fresh examination of Dyson’s life and work, exploring his particular way of thinking about deep questions that range from the nature of matter to the ultimate fate of the universe.

The chapters—written by leading scientists, historians, and science journalists, including some of Dyson’s colleagues—trace Dyson’s formative years, his budding interests and curiosities, and his wide-ranging work across the natural sciences, technology, and public policy. They describe Dyson’s innovations at the intersection of quantum theory and relativity, his novel nuclear reactor design (and his never-realized idea of a spacecraft powered by nuclear weapons), his years at the Institute for Advanced Study, and his foray into cosmology. In the coda, Dyson’s daughter Esther reflects on growing up in the Dyson household. “Well, Doc, You’re In” assesses Dyson’s successes, blind spots, and influence, assembling a portrait of a scientist’s outsized legacy.


Contributors
Jeremy Bernstein, Robbert Dijkgraaf, Esther Dyson, George Dyson, Ann Finkbeiner, Amanda Gefter, Ashutosh Jogalekar, David Kaiser, Caleb Scharf, William Thomas
David Kaiser is Germeshausen Professor of the History of Science and Professor of Physics at MIT. He is the author of several award-winning books on the history of science, including Quantum Legacies: Dispatches from an Uncertain World, and the editor of Becoming MIT: Moments of Decision (MIT Press). His work has been featured in Science, Nature, the New York Times, and the New Yorker.