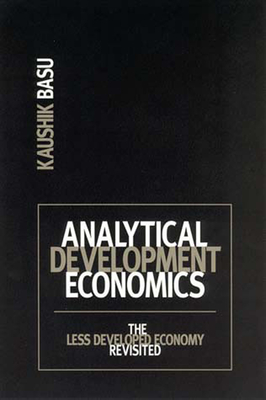 
Not On Our Shelves—Ships in 1-5 Days
Virtually all industrialized nations have annual per capita incomes greater than $15,000; meanwhile, over three billion people, more than half the worlds population, live in countries with per capita incomes of less than $700. Development economics studies the economies of such countries and the problems they face, including poverty, chronic underemployment, low wages, rampant inflation, and oppressive international debt. In the past two decades, the international debt crisis, the rise of endogenous growth theory, and the tremendous success of some Asian economies have generated renewed interest in development economics, and the field has grown and changed dramatically.

Although Analytical Development Economics deals with theoretical development economics, it is closely grounded in reality. The author draws on a wide range of evidence, including some gathered by himself in the village of Nawadih in the state of Bihar, India, where—in huts and fields, and in front of the village tea stall—he talked with landlords, tenants, moneylenders, and landless laborers. The author presents theoretical results in such a way that those doing empirical work can go out and test the theories.

The book is a revision of Basu's The Less Developed Economy: A Critique of Contemporary Theory (Blackwell, 1984). The new edition, which has several new chapters and sections, incorporates recent theoretical advances in its comprehensive, up-to-date treatment of the subject. It is intended primarily as a textbook for a one-semester graduate course, but will also be of interest to researchers in economic development and to policymakers.

Kaushik Basu is C. Marks Professor of International Studies at Cornell University and former Senior Vice President and Chief Economist at the World Bank. He is the author of An Economist in the Real World (MIT Press).