Witches, Whores, and Sorcerers: The Concept of Evil in Early Iran (Paperback) 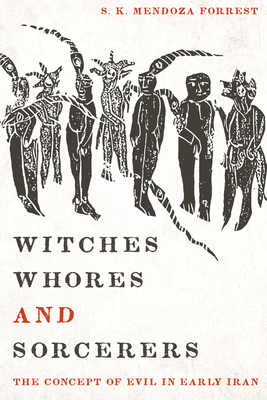 Witches, Whores, and Sorcerers: The Concept of Evil in Early Iran (Paperback)

Early Iranians believed evil had to have a source outside of God, which led to the concept of an entity as powerful and utterly evil as God is potent and good. These two forces, good and evil, which have always vied for superiority, needed helpers in this struggle. According to the Zoroastrians, every entity had to take sides, from the cosmic level to the microcosmic self.

One of the results of this battle was that certain humans were thought to side with evil. Who were these allies of that great Evil Spirit? Women were inordinately singled out. Male healers were forbidden to deal with female health disorders because of the fear of the polluting power of feminine blood. Female healers, midwives, and shamans were among those who were accused of collaborating with the Evil Spirit, because they healed women. Men who worked to prepare the dead were also suspected of secret evil. Evil even showed up as animals such as frogs, snakes, and bugs of all sorts, which scuttled to the command of their wicked masters.

This first comprehensive study of the concept of evil in early Iran uncovers details of the Iranian struggle against witchcraft, sorcery, and other "evils," beginning with their earliest texts.

Mendoza Forrest's study is a comprehensive contribution to the study of the concept of evil in early Iran and a pioneering work. It succeeds to combine its thematic structure without losing sight of historical developments through referring to the earliest compositions and then following them up with appropriate later compositions.
— Journal of American Academy of Religion