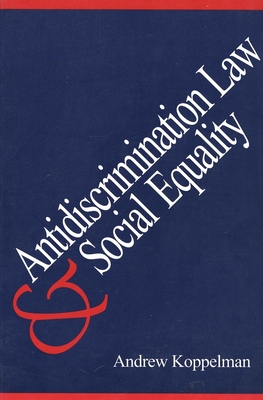 
Not On Our Shelves—Ships in 1-5 Days
This important book addresses head-on the controversy over attempts to reshape society in the name of antidiscrimination. While most Americans understand that racism and similar ideologies are so destructive that the state should do what it can to eradicate them, this understanding conflicts with another widely held idea, that the shaping of citizens' beliefs is not a legitimate objective of a liberal state. Andrew Koppelman argues that the modern conception of antidiscrimination law as a project of cultural transformation is consistent with, and even demanded by, principles of liberty. He clarifies the moral principles that should guide a society in which some groups, such as blacks, women, and homosexuals, are unfairly stigmatized.

Koppelman surveys leading accounts of the evil that antidiscrimination law seeks to remedy, analyzing works by such theorists as Ronald Dworkin, John Hart Ely, Kenneth Karst, Owen Fiss, Alan Freeman, Catharine MacKinnon, and Iris Marion Young. He shows that, while each points to a valuable moral aspiration, none of these aspirations can be realized without cultural transformation, because the central evil that antidiscrimination law seeks to remedy is unjust social devaluation. Koppelman takes up objections from liberal theory, focusing on the works of Robert Nozick, John Rawls, and Bruce Ackerman, and he concludes that liberal principles themselves condemn the corrupting and degrading effects of prejudice and forbid official indifference to those effects. In a final chapter, he addresses the question whether the law should contribute to the transformation of culture by penalizing hate speech and pornography.