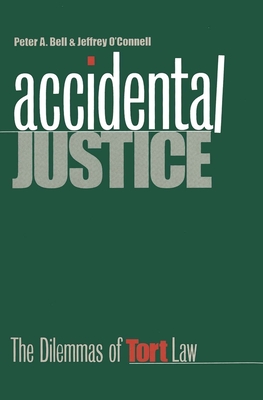 By Peter A. Bell, Jeffrey O'Connell


Not On Our Shelves—Ships in 1-5 Days
A woman suffers paralyzing injuries in a car accident but fails in court to prove the other driver's fault. She loses her case and is left bankrupt as well as maimed. An intoxicated man stumbles in the path of a subway train. He sues the local transit authority and wins a $9 million judgment. Real-life tort (or accident) cases like these inspire outrage against a system that seems frustratingly slow, inequitable, and expensive. In this even-handed and fascinating book, two leading tort experts explain to lay readers the strengths and weaknesses of our tort law system. Peter Bell and Jeffrey O'Connell demystify tort law and bring to life the process of tort litigation.

The roots of tort law lie in human suffering, maimed bodies, shattered spirits, and extinguished lives, say the authors. They discuss tort law's compensatory and deterrent functions; its delays, fortuity, and high transaction costs (mostly in lawyer's fees); and its role in discouraging harmful—as well as, on occasion, useful—activities. In a discussion of mass toxic tort cases, the authors investigate the ability of the courts to deal adequately with huge suits (related to breast implants or tobacco-related illnesses, for example) that involve massive numbers of claimants. Bell and O'Connell conclude with an objective review of such current reform enactments and proposals as no-fault insurance, caps on damages, and contingency fee reform.

Peter Alan Bell is professor of law at Syracuse University College of Law. Jeffrey O'Connell is Samuel H. McCoy Professor of Law and Class of 1948 Professor of Scholarly Research in Law at the University of Virginia School of Law.