Atheist Delusions: The Christian Revolution and Its Fashionable Enemies (Paperback) 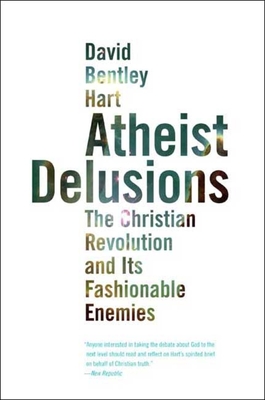 Atheist Delusions: The Christian Revolution and Its Fashionable Enemies (Paperback)

Among all the great transitions that have marked Western history, only one—the triumph of Christianity—can be called in the fullest sense a “revolution”

In this provocative book one of the most brilliant scholars of religion today dismantles distorted religious “histories” offered up by Christopher Hitchens, Richard Dawkins, and other contemporary critics of religion and advocates of atheism. David Bentley Hart provides a bold correction of the New Atheists’s misrepresentations of the Christian past, countering their polemics with a brilliant account of Christianity and its message of human charity as the most revolutionary movement in all of Western history.

Hart outlines how Christianity transformed the ancient world in ways we may have forgotten: bringing liberation from fatalism, conferring great dignity on human beings, subverting the cruelest aspects of pagan society, and elevating charity above all virtues. He then argues that what we term the “Age of Reason” was in fact the beginning of the eclipse of reason’s authority as a cultural value. Hart closes the book in the present, delineating the ominous consequences of the decline of Christendom in a culture that is built upon its moral and spiritual values.

David Bentley Hart is the author of several books, including In the Aftermath: Provocations and Laments and The Beauty of the Infinite: The Aesthetics of Christian Truth. He lives in Providence, RI.

"Hart has the gifts of a good advocate. He writes with clarity and force, and he drives his points home again and again. He exposes his opponents errors of fact or logic with ruthless precision."—Anthony Kenny, Times Literary Supplement

"Atheist Delusions will be remembered as Hart’s breakout book. His contributions to such journals as First Things have long marked him as a rising public intellectual. . . . Hart’s work is now likely to come to the attention of a wider audience. And not a moment too soon."—William L. Portier, Commonweal


"Few things are so delightful as watching someone who has taken the time to acquire a lot of learning casually, even effortlessly, dismantle the claims of lazy grandstanders. . . . Hart isn’t making a bid for wealth, fame, or cocktail-party acceptance: He knows whereof he speaks."—Stefan Beck, New Criterion

"Anyone interested in taking the debate about God to the next level should read and reflect on Hart’s spirited brief on behalf of Christian truth."—Damon Linker, New Republic

"Hart writes with elegance. Even his invective has style."—Richmond Times-Dispatch

"[A] major work by one of the most learned, forceful, and witty Christian theologians currently writing."—Paul J. Griffiths, First Things


"The strength of Hart's essay is how this modern apologia seeks to disturb the confidence of his interlocutors and bystanders long enough to raise serious doubts about modernity's 'grand narrative.' In its place, Hart presents a robust Christian narrative of true revolution embodied in the early church and sourced in the life, death, and resurrection of Christ. The original revolution . . . is for Hart, very much alive."—Lyndon Shakespeare, Anglican Theological Review

"Atheist Delusions is an ambitious historical essay that takes particular aim at modernity's smug grand perception of itself as an age of reason overthrowing a superstitious age of faith. . . . [Hart] has written an important, provocative, and often brilliant book that hacks at the roots of the new atheists' arguments with devastating force."—Donald A. Yerxa, Perspectives on Science and Christian Faith

"Atheist Delusions is a history that serves life . . . Hart argues for a brave thesis . . . . With astonishing success, [he] achieves his objective."—Christopher Benson, The City

"This is a book I'll return to in the future, and one I strongly recommend for anyone interested in a counter-perspective to popular new atheist writers."—Blair Dee Hodges, Association of Mormon Letters

"[Hart] writes with clarity and force, and he drives his points home again and again."—Anthony Kenny, TruthDig.com

"Indeed, in a culture battle, pitting religion against secularism, Hart may be the best 'corner man' in the business, providing would'be Christian pugilists with a better understanding of both their own strengths and their opponent's weaknesses."—Graham Reside, Interpretation: A Journal of Bible and Theology

"Hart aims to provide his readers with a persuasive evocation of historical facts, moral judgments, philosophical principles, and theological musings, which may persuade them of the beauty of Christian truth. . . . Atheist Delusions is an honest book, which doesn't hide the sometimes repulsive truths related to the political or social aspects of historical Christianity."—Mihail Neamtu, Modern Age

"With impressive erudition and polemical panache, David Hart smites hip and thigh the peddlers of a 'new atheism' that recycles hoary arguments from the past. His grim assessment of our cultural moment challenges the hope that ‘the Christian revolution' could happen again."—Richard John Neuhaus, former editor in chief of First Things

"Provoked by and responding to the standard-bearers of 'the New Atheism,' this original and intellectually impressive work deftly demolishes their mythical account of 'the rise of modernity.' Hart argues instead that the genuinely humane values of modernity have their historic roots in Christianity."—Geoffrey Wainwright, Duke Divinity School

"In this learned, provocative, and sophisticated book, Hart presents a frontal challenge to today's myopic caricature of the culture and religion that existed in previous centuries."—Robert Louis Wilken, University of Virginia

"Surely Dawkins, Hitchens et al would never have dared put pen to paper had they known of the existence of David Bentley Hart. After this demolition-job all that is left for them to do is repent and rejoice at the discreditation of their erstwhile selves."—John Milbank, author of Radical Orthodoxy: A New Theology

"A devastating dissection of the 'new atheism,' a timely reminder of the fact that 'no Christianity' would have meant 'no West,' and a rousing good read. David Hart is one of America's sharpest minds, and this is Hart in full, all guns firing and the band playing on the deck."—George Weigel, Distinguished Senior Fellow, Ethics and Public Policy Center, Washington


“An unanswerable and frequently hilarious demolition of the shoddy thinking and historical illiteracy of the so-called New Atheists.”—Michael Robbins, Commonweal