Victory at Sea: Naval Power and the Transformation of the Global Order in World War II (Hardcover) 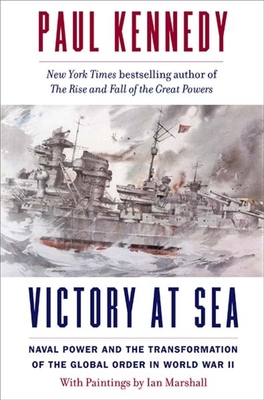 Victory at Sea: Naval Power and the Transformation of the Global Order in World War II (Hardcover)


Not On Our Shelves—Ships in 1-5 Days
A sweeping, lavishly illustrated one-volume history of the rise of American naval power during World War II

“When he is at his best, as he often is in these pages, Kennedy can be dazzling.”—Ian W. Toll, New York Times

“The book makes for enjoyable reading, owing to the author’s easygoing style. . . . Kennedy is an academic who does not write like one; he writes a story, not a treatise.”—Robert D. Kaplan, Washington Post

In this engaging narrative, brought to life by marine artist Ian Marshall’s beautiful full‑color paintings, historian Paul Kennedy grapples with the rise and fall of the Great Powers during World War II. Tracking the movements of the six major navies of the Second World War—the allied navies of Britain, France, and the United States and the Axis navies of Germany, Italy, and Japan—Kennedy tells a story of naval battles, maritime campaigns, convoys, amphibious landings, and strikes from the sea. From the elimination of the Italian, German, and Japanese fleets and almost all of the French fleet, to the end of the era of the big‑gunned surface vessel, the advent of the atomic bomb, and the rise of an American economic and military power larger than anything the world had ever seen, Kennedy shows how the strategic landscape for naval affairs was completely altered between 1936 and 1946.
Paul Kennedy is J. Richardson Dilworth Professor of History and director of International Security Studies at Yale University. He is the author or editor of more than twenty books. His best-known work, The Rise and Fall of the Great Powers, provoked intense debate on its publication thirty-five years ago and has been translated into more than twenty languages. Ian Marshall was a fellow and past president of the American Society of Marine Artists as well as a member of the Royal Society of Marine Artists.
“The book makes for enjoyable reading, owing to the author’s easygoing style. . . . Kennedy is an academic who does not write like one; he writes a story, not a treatise. It is a story enhanced by Marshall’s exquisite artwork.”—Robert D. Kaplan, Washington Post

“Engrossing. . . . Alongside the pacey narrative, ranging across both the European and Pacific theaters of the war, are evocative battle-themed paintings by the late British artist Ian Marshall. . . . Kennedy convincingly shows that World War II was won, ultimately, by superior American industrial capacity. . . . A new world had been born. It was indeed, as Kennedy terms it, ‘the age of Pax Americana,’ and it originated in the American naval supremacy he so vividly chronicles in Victory at Sea.”—Brendan Simms, Wall Street Journal

“An authoritative global narrative [and] lavishly illustrated with watercolour paintings by the fine marine artist Ian Marshall, together with excellent maps and graphs. . . . I believe the Royal Navy and US navy to have been the outstanding wartime fighting services of their respective nations. Kennedy offers them a fitting tribute and a penetrating analysis.”—Max Hastings, Sunday Times

“For the illustrations alone, Victory at Sea is worth the hardcover price. . . . When he is at his best, as he often is in these pages, Kennedy can be dazzling. His prose never fails him; he is always graceful and lucid on the page.”—Ian W. Toll, New York Times

“Kennedy, the author of the epochal The Rise and Fall of the Great Powers, brings his wide-ranging historical vision to this hugely authoritative history of the 1939–45 war at sea. Much conventional wisdom—about the role of the German U-boats, for instance—goes out of the window in his penetrating analysis.”—Sunday Times, “50 Best Books for the Sunlounger”

“There is no shortage of histories of naval warfare, not least on World War II. What Kennedy’s book brings is a broader perspective on the role—sometimes decisive, sometimes desultory—that naval power would play not just in breaking the power of imperial Japan, Italy, and Nazi Germany but in creating a world that would last.”—Alexander Wooley, Foreign Policy

“Victory at Sea is a tour de force. It is sweeping naval history of the Second World War, delightful in its relating of facts and lucid in its presentation of arguments. . . . Victory at Sea is capable of inspiring a new generation of military historians to study sea power in the tradition of their forerunners.”—Daniel J. Samet, American Purpose

“A great read, Kennedy’s book encourages one to think and think again, and not only about the events of World War II but also why that conflict is so totally atypical of warfare as a whole, past and present.”—Jeremy Black, New Criterion

“Essential reading for anyone generally interested in the Second World War. . . . Kennedy’s expansive work provides a wonderful strategic overview of the naval conflicts during the Second World War. It is also an analysis, utilizing the navy as an exemplar, of the shift in global fortunes and global power.”—Rob Clemm, Journal of Indo-Pacific Affairs

“Marshall’s art is one of this book’s many delights. . . . Marshall’s meticulously detailed paintings illustrate Kennedy’s point that, although the production statistics tell part of the war’s story, ‘the deficit in all deterministic explanations—the substructure alters, therefore the superstructure is changed—is that they lack human agency.’”—Mike Watson, Washington Free Beacon

“This is not just a book about navies in wartime—it is a book which examines the naval war in the wider context of a changing world, and which looks at landscapes, both military and political.”—Sarah Miller, Aspects of History

“While a previous century found Mahan’s Influence of Sea Power on the bridges and wardrooms of many of the world’s fleets, Victory at Sea is worthy of similar treatment. . . . Marshall’s art combined with Kennedy’s prose makes this volume a most desirable acquisition.”—David F. Winkler, Naval History

“Kennedy packs an enormous amount of information into Victory at Sea.”—A. A. Nofi, NYMAS Review

“The wealth of material on the naval war [in World War II] would appear to preclude any new insights into its origins, conduct, or eventual outcome. Yet Kennedy does just that. . . . The breadth of his approach to his subject distinguishes Kennedy’s book among its peers.”—Dov S. Zakheim, Orbis

“This handsome book by a distinguished historian is a sweeping history . . . to be valued for its art as much as for its narrative.”—Seapower

“This is a brilliant and original work of history, literature, and art—a rare combination.”—Admiral James Stavridis, Yale Alumni Magazine

“A brilliant and gripping book by a master historian working at the top of his powers.”—Fredrik Logevall, Harvard University

“Paul Kennedy has written a classic in this sweeping narrative account of the desperate struggle to command the seas and America’s rise as a superpower during the Second World War.”—John H. Maurer, U.S. Naval War College

“This extraordinary work of both global history and nautical art brings two brilliant minds together in Paul Kennedy’s luminous prose and Ian Marshall’s lovely paintings.”—Admiral James Stavridis, author of 2034: A Novel of the Next World War

“In Victory at Sea, Paul Kennedy demonstrates why he is the world’s leading scholar on naval strategy. For serious students of World War II or naval history, this book is a must read.”—John J. Mearsheimer, University of Chicago