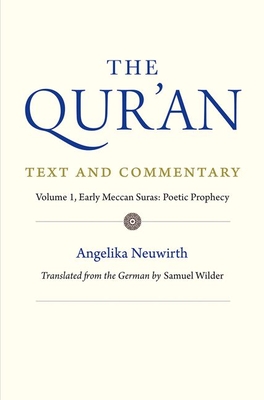 
On Our Shelves Now at:
The first volume of a world-renowned scholar’s long-awaited Qur’an commentary, now available in English

Angelika Neuwirth’s six-volume commentary, published originally in Germany, offers a historical and philological analysis of the form, structure, and semantic message of each of the 114 Qur’anic suras. It brings together the fruits of the past hundred years of modern scholarship and provides access to the aesthetic, theological, linguistic, and semantic background required to appreciate the unique novelty, force, and historical position of the Qur’an. Contextualizing the Qur’anic message in the broader world of late antiquity, it bridges the gaps between the inner-Islamic scholarly world and the academy.

Skillfully translated by Samuel Wilder, this first volume focuses on the Meccan suras, the earliest and often the most aesthetically striking and compelling part of the corpus of Qur’anic proclamations.
Angelika Neuwirth is professor emeritus of Qur’anic studies at the Freie Universität Berlin. Samuel Wilder is a translator who has held postdoctoral research fellowships at the Freie Universität Berlin and the Orient-Institut Beirut. He lives in Berlin.
"Angelika Neuwirth has established herself as one of the world’s foremost authorities on the study of the Qur’an. The publication of The Qur’an: Text and Commentary presents an extraordinary opportunity for English-speaking audiences to benefit from her scholarship. Neuwirth strives to read the Qur’an as a late antique text, and prioritizes the orality of the text.  All serious students of scholarship on the Qur’an would do well to engage Neuwirth’s work here, and Yale University Press is to be congratulated in bringing this English translation to light."—Omid Safi, Duke University

“Neuwirth's work on interpreting the Quran has had a strong impact far outside the world of Islamicists and Arabists, as well as outside of academia. Her understanding of the holy book of Islam as not only a late antique but also a ‘European’ text is an exciting and thought-provoking new way of approaching it.”—Anders Winroth, University of Oslo

“Neuwirth is a paradigm-changer in the field of late antique and early Islamic studies—a philologist in the best possible sense. Her holistic understanding of the Qur’an as both written text and oral performance has placed her at the forefront of what is most exciting in the now rejuvenated multi-disciplinary field of Quranic studies.”—Elizabeth Key Fowden, University of Cambridge

“Neuwirth’s chronological Qur’an commentary, complete with Arabic text and translation, has soon emerged as a standard work in the field. Neuwirth focuses on a detailed literary and structural analysis, and she reveals the manifold textual connections to the monotheist tradition of the Eastern Mediterranean. This is a work of great erudition by a leading scholar in Qur’anic studies.”—Frank Griffel, Yale University

“This work is a meticulous exposition of early Meccan suras as ‘transcripts of a proclamation.’ Neuwirth's learned and always supple analysis of textures, rhythm, sounds, and significations illuminates each sura's poetic discourse. Simply put, no-one has contributed more to our understanding of Meccan suras than Angelika Neuwirth.”—Shawkat Toorawa, Yale University