The New Testament: A Translation (Paperback) 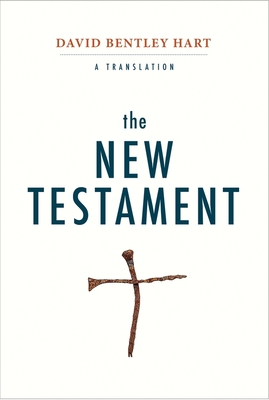 The New Testament: A Translation (Paperback)

By David Bentley Hart (Translated by)


On Our Shelves Now at:
From one of our most celebrated writers on religion, a fresh, bold, and unsettling new translation of the New Testament

“The greatest achievement of Hart’s translation is to restore the urgency of the original. . . . It is beautiful.”—James Mumford, Standpoint

“This translation is a remarkable feat.”—Lucy Beckett, Times Literary Supplement

David Bentley Hart undertook this new translation of the New Testament in the spirit of “etsi doctrina non daretur,” “as if doctrine is not given.” Reproducing the texts’ often fragmentary formulations without augmentation or correction, he has produced a pitilessly literal translation, one that captures the texts’ impenetrability and unfinished quality while awakening readers to an uncanniness that often lies hidden beneath doctrinal layers.

The early Christians’ sometimes raw, astonished, and halting prose challenges the idea that the New Testament affirms the kind of people we are. Hart reminds us that they were a company of extremists, radical in their rejection of the values and priorities of society not only at its most degenerate, but often at its most reasonable and decent. “To live as the New Testament language requires,” he writes, “Christians would have to become strangers and sojourners on the earth, to have here no enduring city, to belong to a Kingdom truly not of this world. And we surely cannot do that, can we?”
David Bentley Hart, an Eastern Orthodox scholar of religion and a philosopher, writer, and cultural commentator, is a fellow at the Notre Dame Institute for Advanced Study. He lives in South Bend, IN.
“The life of Jesus in the New Testament reaches us via four voices, four accounts that overlap, diverge, corroborate, and destabilize one another. . . . By putting us closer to these differences, to the distinctive sound of each voice . . . Hart is doing something important.”—James Parker, Atlantic

“It will be a long time before I put [Hart’s translation] back on my shelf. It in particular points up the many deficiencies of the NIV and the ESV.”—AN Wilson, New Statesman

“The greatest achievement of Hart’s translation is to restore the urgency of the original. . . compelling, and it is beautiful.”—James Mumford, Standpoint

“[Hart] has risen to the challenge with a bold determination.”—Dr. John Court, Church Times

“This translation is a remarkable feat. Anyone, however familiar with the texts, reading it straight through is bound to have gained a clean, complex and compelling impression of the springtime of the Church, and the energy, urgency and sense of wonder with which the evangelists, Paul and the author of the letter to the Hebrews wrote of the extraordinary person and events, and the meaning of both, that were their news for the world.”—Lucy Beckett, Times Literary Supplement

“Disarmingly beautiful in its own way. . . [Hart] does nothing less than focus our attention on the urgency of what the Greek text is telling us, and by doing so focuses our attention on – as Rowan Williams puts it on the dust-jacket – ‘what was and is uncomfortably new about the New Testament’.”—Stephen Miller, Theology

“The book sets out to be provocative and succeeds. . . . [Hart] conveys exceptionally well the urgency of the New Testament. The message itself is of supreme and burning importance, and the authors were in a hurry to get it out, and Hart lets us feel this ‘from the inside.’”—Paul Mankowski, First Things

“Hart’s translation is neither reductionist nor revisionist. In his hands, the words of Jesus and his followers produce not shivers of mere approximation, but rather shivers of awe at the clarity, poignancy, and simplicity of this complex treatise. Hart maintains a splendid rhythm and frankness throughout . . . We are delivered a text pulsing with contemporary urgency—as prompts for action, rather than mere obligation or dogma.”—Jennifer Kurdyla, America

“Hart is brilliant. . . . All theologians, and anyone interested in the New Testament as at least a quasi-classical document, will be in his debt . . . Hart’s translation has the great virtue of reminding us that this text is not safe: if we think it is familiar, we are in error.”—Victor Lee Austin, New Criterion

“We need a Bible not made in our image. So we have Hart to thank—both for giving us a Bible we did not want and for showing us how much we need it.”—Brett Beasley, The Cresset

“Fresh translations of familiar texts are useful because they make us reexamine what we thought we knew. Hart has certainly made me think more deeply about the centrality of the world’s end to the entirety of the New Testament . . . Hart tells us that he wanted to make this book wild, repellant, ‘just a bit indecent,’ and not what we expected. He succeeds.”—Garry Wills, New York Review of Books

“Refreshing . . . a delight to read . . . brings a joy to scriptural reading unparalleled by other translations of late . . . I recommend Hart’s translation of the New Testament to anyone who wishes to see the Scripture in a new light.”—Matthew A. Smith, Princeton Theological Review

“Hart emphasizes that the New Testament’s politics and theology spring from what he calls its ‘indiscriminate polyphony’ . . . Hart’s provocations register as matters of style . . . that make the translation noteworthy as a literary achievement, not simply as a theological or historiographic statement.”—Lucas Kwong, Public Books

“Hart has without question done a great service for readers of the New Testament. . . . That Hart deeply understands his ancient Greek is also without question. This understanding establishes his ability to rework well-traveled scripture not to recast, but reclaim its strangeness and alterity.”—Burke Gerstenschlager and Ed Simon, Los Angeles Review of Books

“This scrupulous, knotty, learned rendering of some of the most familiar texts of our culture makes us see with new clarity just what was and is uncomfortably new about the New Testament.”—Rowan Williams, theologian and poet, Cambridge

“In this age of committee-generated translations of the Bible, a fresh and pointedly different translation of the New Testament by a single scholar is a remarkable achievement. Hart's approach is intentionally provocative, and strong reactions are sure to follow.  Let the games begin.”—John P. Meier, author of A Marginal Jew: Rethinking the Historical Jesus

"David Hart's translation of the New Testament is a theological and ecclesial event of the first magnitude. By providing, for the first time, a literal English translation of the Greek (and demonstrating that the most literal can be the most strikingly beautiful rendering) Hart has shown, after 500 years, that the core of Reformation theology is un-Biblical and that certain currents of Latin theology are dubious or inadequate. This new version, which should become the standard one for scholarly use, also makes it clearer that, while doctrinal liberalism is wishful thinking, credal Christianity only emerged from a plausible but subtle reading of sometimes teasingly ambivalent texts.  Hart's brilliant postscript amounts to a call for a more genuinely Biblical orthodoxy: universalist, synergic, participatory, cosmic, gnostic (in a non-heterodox sense) and communitarian."—John Milbank, University of Nottingham

“In its simplicity and freshness David Hart’s New Testament translation will sound as strange and wondrous to twenty-first-century, English-language speakers as the Greek of the New Testament sounded to first-century speakers of Greek.”—Robert Louis Wilken, author of The First Thousand Years

“Hart notes that the heart of this good news . . . focuses much more on the salvation of all than on the condemnation of some. . . . Nothing like reading the New Testament again, without a filter. Thank you, David Bentley Hart!”—Frederico Lourenço, classicist, winner of the Pessoa Prize