Marie-Antoinette: The Making of a French Queen (Paperback) 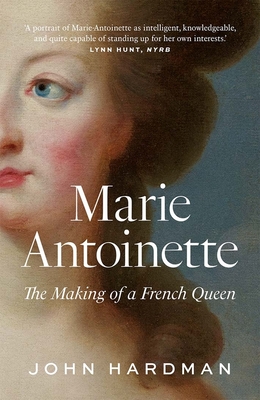 Marie-Antoinette: The Making of a French Queen (Paperback)

“Presents [Marie-Antoinette] as much more than a symbol whose meaning is in the eye of her beholder . . . neither martyr nor voluptuary but rather a serious participant in politics.”—Lynn Hunt, New York Review of Books

Who was the real Marie-Antoinette? She was mistrusted and reviled in her own time, and today she is portrayed as a lightweight incapable of understanding the events that engulfed her. In this new account, John Hardman redresses the balance and sheds fresh light on Marie-Antoinette’s story.

Hardman shows how Marie-Antoinette played a significant but misunderstood role in the crisis of the monarchy. Drawing on new sources, he describes how, from the outset, Marie-Antoinette refused to prioritize the aggressive foreign policy of her mother, Maria-Theresa, bravely took over the helm from Louis XVI after the collapse of his morale, and, when revolution broke out, listened to the Third Estate and worked closely with repentant radicals to give the constitutional monarchy a fighting chance. For the first time, Hardman demonstrates exactly what influence Marie-Antoinette had and when and how she exerted it.
John Hardman is one of the world’s leading experts on the French Revolution and the author of several distinguished books on the subject.
“Splendid . . . masterly . . . a wonderfully gripping biography.”—Allan Massie, Wall Street Journal

“Hardman utilises years of researching the fall of the French monarchy, weaving in accounts by those who knew, loved or loathed Marie Antoinette, to offer a broadly convincing portrait of a woman who ‘inspired loyalty in strangers who were willing to risk their lives for her, even when the chances of success were slight.' It is a thought-provoking portrait of a brave, well-intentioned, if often misguided queen.”--Gareth Russell, The Times (London)

“Marie-Antoinette: The Making of a French Queen presents [Marie-Antoinette] as much more than a symbol whose meaning is in the eye of her beholder. In Hardman’s telling she is neither martyr nor voluptuary but rather a serious participant in politics.”—Lynn Hunt, New York Review of Books

“Hardman’s erudite and elegantly written biography deserves to take its place as the definitive academic biography of Marie-Antoinette, a worthy companion to his biographies of Louis XVI. Hardman brings Marie-Antoinette to life as political player who carved out a sphere of real authority in a political culture that denied the queen legitimate influence in matters of state.”—Jennifer M. Jones, H-France Review

“For the first time, Hardman demonstrates exactly what influence Marie-Antoinette had and when and how she exerted it. In short Hardman, whose biography is only the second by an academic in the past one-hundred years, provides the reader with a valuable insight into the world and the thought of Marie-Antoinette. . . . Hardman's book is one that any serious scholar or student of 18th-century French History cannot go without.”—Charles Coutinho, newbooksnetwork.com

“John Hardman’s new biography crowns the existing panoply of biographies detailing the life of this tragic princess. . . . [It is] an exciting and rewarding volume that will blow open quite a few windows where before we had only ‘peeps through a keyhole’ or the surmises and conjectures of hearsay evidence.”—Nashville Public Library blog

“Hardman is far more than a biographer, his works are key to understanding the politics of the reign of Louis XVI. Steeped in the original sources and well able to decode the plots and schemes of the factions, this is both an entertaining and convincing new interpretation of the tragic Queen”—Peter Campbell, author of Power and Politics in Old Regime France

"Superb. Hardman draws upon his vast knowledge of the period to present a new, deeply researched and compelling portrait of a much-maligned queen'—Julian Swann, author of Exile, Imprisonment, or Death

“Gripping and beautifully-written. Hardman centres on the queen's political role, long a subject of myth and controversy. He cuts through both with forensic skill, and reveals a much more intelligent and impressive figure than the frivolous spendthrift of legend.”—Munro Price, author of The Fall of the French Monarchy