The Music Never Stops: What Putting on 10,000 Shows Has Taught Me About Life, Liberty, and the Pursuit of Magic (Hardcover) 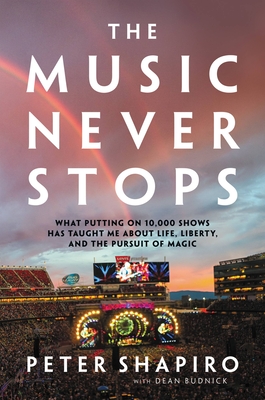 The Music Never Stops: What Putting on 10,000 Shows Has Taught Me About Life, Liberty, and the Pursuit of Magic (Hardcover)

By Peter Shapiro, Dean Budnick (With)


On Our Shelves Now at:
The engrossing, insightful, and personal musical odyssey of Peter Shapiro, perhaps the most notable independent concert promoter since Bill Graham

Peter Shapiro is the best known and most influential concert promoter of his generation. He owned the legendary Wetlands in Tribeca and has gone on to much bigger things, including Brooklyn Bowl (NYC, Las Vegas, Philadelphia, and Nashville), the Capitol Theatre in Port Chester, producing U2 3D, and promoting the Grateful Dead’s fiftieth-anniversary tour (“Fare Thee Well”) featuring the Core Four and Trey Anastasio . . . and so much more.

In The Music Never Stops, Shapiro shares the inside story of how he became a power-house in the music industry—an island in an increasingly consolidated landscape of venues, ticketing, and touring—through the lens of fifty iconic concerts. Along the way, readers gain insight into what it was like to work with some of the most celebrated bands in modern music, including not just the Grateful Dead and U2, but also Bob Dylan, Phish, Dave Matthews Band, Al Green, Ms. Lauryn Hill, Jason Isbell, Preservation Hall Jazz Band, The Roots, Robert Plant, Leonard Cohen, and many more.

Featuring never-before-published back-stage anecdotes, insights, and photographs of the biggest bands in the business and the concerts that later became legendary, The Music Never Stops is a perfect guide for any-one who wants to understand the modern live music industry.
Peter Shapiro is a veteran concert promoter whose signature achievements over the past two decades have included Wetlands Preserve, Brooklyn Bowl, the Capitol Theatre, the Lockn' festival, U2 3D, the Jammy Awards, and Fare Thee Well, the 2015 concert event in which he reunited the "core four" members of the Grateful Dead alongside Phish guitarist Trey Anastasio for a record-breaking run of stadium shows. More recently, Shapiro founded Lockn', a music and camping festival that draws 30,000 music fans to Arrington, VA, as well as Jazz & Colors, an experiential event that he has produced in Central Park, the Metropolitan Museum of Art and Chicago's Field Museum. Shapiro also created the Green Apple Festival (which took place simultaneously across eight cities) along with the Jammy Awards. He served as a producer on the We Are One inaugural concert and later returned to the National Mall to oversee Earth Day 40th anniversary celebration, the Women's March and the March for Science.

Dean Budnick has written seven books, including Ticket Masters: The Rise of the Concert Industry and How the Public Got Scalped. He is the co-author of Blues Traveler frontman John Popper's recent memoir, Suck & Blow: And Other Stories I'm Not Supposed to Tell. Budnick is the editor-in-chief of Relix and has reported on the live entertainment industry for Billboard, Variety and The Hollywood Reporter. He directed the documentary Wetlands Preserved: The Story of An Activist Rock Club, which opened nationally before airing on the Sundance Channel. He also is the creator and host of the Long May They Run podcast, which reached #1 on the Apple Music Podcast charts.
"An entertaining and often amusing look into the music business."—Wall Street Journal

“The most important concert producer of his day.”—Joel Selvin, San Francisco Chronicle

"An entertaining insider’s tour of the concert business from a likable guide."—Kirkus

"A friendly, enjoyable ramble through live music history as seen from an amiable insider."—Booklist

“Peter thinks like a musician. He understands the spirit of the music I’m trying to make because he wants to create situations for that music that enhance the experience on many levels.”
—Phil Lesh, Grateful Dead, author of Searching for the Sound

“Peter Shapiro is a unicorn. He has a magical / mythical quality to him. We met back in the days of Wetlands, which you’ll read about in this book. You never knew who you were going to see there—some nights it could be Dave Matthews Band, the next night Toots and the Maytals, another night it’s Pearl Jam. I don’t know any venue that existed that could pull that off. I remember wondering who was behind this, who could make these nights happen—and that was Shapiro.”
—Jimmy Fallon, The Tonight Show

“Pete is the rarest of personalities in the music industry. He explodes into the room, swinging for the fences, full of unbridled enthusiasm, and joy, with huge energy and huge ideas. For Pete, the dream is still alive—the power of live music—and I love him for that.”
—Trey Anastasio, Phish

“Peter is the reincarnation of the '60's and '70's entrepreneurs. He's as close as we have to Bill Graham.”
—Stevie Van Zandt, E Street Band, Little Steven's Underground Garage, The Sopranos, author of Unrequited Infatuations

“I met Pete in the late '90s when he opened his first club.  His boundless energy and enthusiasm are infectious.  He is so passionate about all that he does and is ready to dive in at the deep end. He has great taste and is a perfect combination of the creative collaborator who has his eye on the business side of things, which is quite a rare quality but so important. One Love.”
—Chris Blackwell, Founder Island Records

“I've given Peter 11th-hour surprises, like, ‘How about a practice Usher show?’ or ‘Can we organize a quickie Elvis Costello performance?’ Anyone else would have riddled me with bullets for taking such a grand idea and tossing it to him with seconds left to spare.  But, with him it's always, ‘Oh man, I can't wait to get to it.’ And it's always magic.”
—Questlove, The Roots, author of Creative Quest

“The Music Never Stops, like everything Peter Shapiro, inspires and ignites all of our senses— even those we didn’t know we had.  Peter is a brilliant architect of communities, cultures, and dreams.  This book is where you come to grow and for your deal to go down—and if you look at it right—you’ll find the next rainbow, at just the right time.”
—Bill Walton, NBA Hall of Famer

“Peter has said, ‘I try to think obsessively about the future, and you have to be ready for multiple different paths.’ One of those paths has been to make millions of concertgoers more aware of our global environmental movement, while encouraging environmental awareness and commitment by the music industry. He is always collaborative, he dissolves differences and he makes it happen. He’s that kind of guy.”
—Kathleen Rogers, President Earth Day Network

“Pete Shapiro has borne witness to the inner workings of the most important cultural events of the last quarter century. Impresario, Innovator and Beloved Instigator… the stories in his book will blow your mind!”
—Don Was, President Blue Note Records

“It’s a special person, a magician of the tallest order, who simply figures it out.  A person filled with passion for the blessing, the reason we all wake up day after day with a glimmer of optimism and hope: the music.  Pete’s story is one of dedication, persistence, success, and some failure too.  It’s an inspiring journey.  He always has multiple irons in the fire and dozens of balls in the air.  He is an idea person who is on a crusade for the music, with the talent, knowledge and drive to bring the vision to life. This book could easily be called Whatever It Takes.”
—Ben Jaffe, Creative Director, Preservation Hall Jazz Band

“I met Pete in 1996. Since then, I’ve told anyone who will listen that he is the Bill Graham of our generation. He kept my word.”
—Greg Scholl, Executive Director, Jazz at Lincoln Center

“In an industry filled with hucksters and charlatans, Peter Shapiro is a music promoter with a heart and a soul.  He produces music with all the best parts of the good old days and none of the bad.  He is a real, live Unicorn.”
—Roger McNamee, Co-Founder Elevation Partners, Moonalice